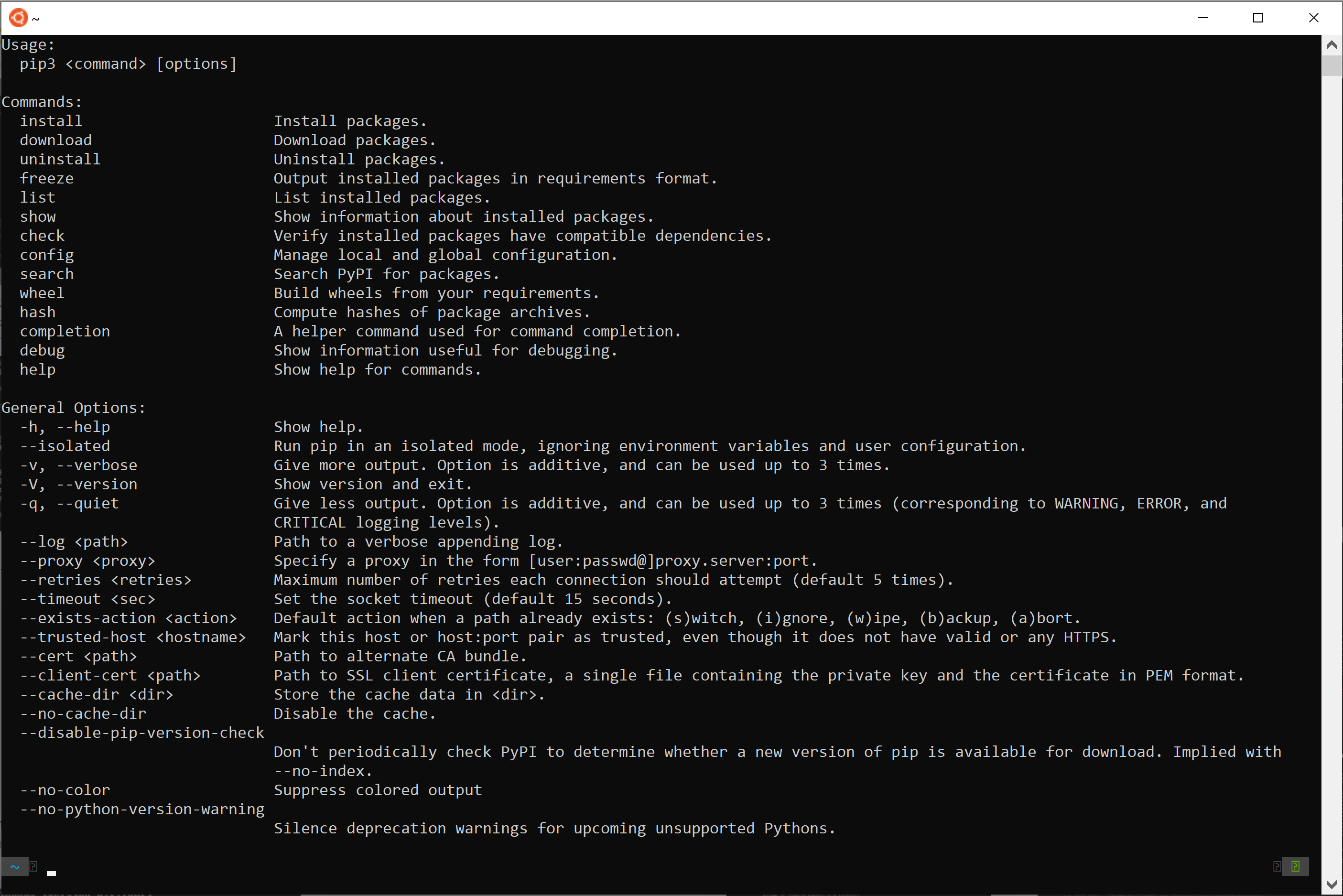 But before we start, let’s make sure pip itself is installed!

First things first: we need to install pip itself. The good news is that Pip is probably already present on your system. Most Python installers also install Pip. Python’s pip is already installed if you are using Python 2 >=2.7.9 or Python 3 >=3.4 downloaded from python.org. If you are working in a virtual environment, pip also gets installed for you.

So before you try to install Pip, make sure it’s not already present on your system. Open a terminal (Linux/MacOS) or a Windows shell, and type in the following command:

If the pip command gives an error, try pip3 instead. On some systems, Python 2 and 3 can be installed next to each other. On those systems, pip is often installed under the name pip3:

If that didn’t work either, you can try the pip module that is built into most modern Python installations:

If that failed too, you need to install it yourself, so let’s take a look at how you can manually install it.

Install Pip on Windows and Mac

On Windows and Mac, you can download a Python script to install pip, called get-pip.py. Download the file and run it with Python from a command prompt or terminal window:

Make sure you are in the directory where the script was downloaded.

You can install pip with the apt package manager on Debian, Ubuntu, Linux Mint, and other Debian derivatives. It’s the most recommended method and ensures your system will stay in a consistent state.

If your system uses the yum package manager, you can try the following:

Pip is part of EPEL (Extra Packages for Enterprise Linux), so you might need to enable that first.

If these methods fail, you can also download a Python script that will install pip for you, with the following commands:

Preferably, you install packages inside a virtual environment. Good news: pip is present inside your virtual environment by default. Because everything in our venv is installed locally, you don’t need to become a superuser with sudo or su.

Alternatively, you can install packages outside of a Python venv as well. This is only recommended for very generic packages, like pip itself. In fact, let’s try to upgrade our system-wide pip installation first. Make sure you are not currently in a virtual environment and enter:

This command asks pip to install pip, and update it if it’s already installed.

Now that we’re up-to-date, let’s try to install simplejson. Enter your virtual environment and type in:

By default, pip tries to install a package system-wide. If you don’t use something like sudo or become an administrator, you might get permission errors. Installing packages system-wide can be fine, e.g. for generic libraries like Numpy and Pandas, or for complete environments like Jupyter Notebook. However, you won’t always have the super-user rights to install packages system-wide, e.g. when you’re working on a shared or locked down system at work or at school.

In such cases, you can install packages to the Python user install directory for your platform by using the --user option. On Unix-like systems, this will typically mean packages are installed somewhere in ~/.local/. On Windows, it will be %APPDATA%\Python.

In fact, installing packages in the local install directory is often the default when running outside of a virtual environment and not as root on more and more Linux distributions.

Here’s how you explicitly install the simplejson package locally:

In a virtual environment, it’s a good habit to install specific versions of packages. It ensures that you reap the full benefits of using virtual environments in the first place. After all, we do this to make sure our software always works as intended by pinning down specific dependency versions.

A requirements.txt file contains a simple list of dependencies, one per line. In its most simple form, it could look like this:

But what we really want is to pin the versions. That’s not hard either:

You can also relax these constraints a little, by using >= and <=, or even a combination of those:

How do you know what range to use? Unfortunately, there are no rules to this. You will have to read the release notes and such from the package in question. That’s why many developers use an alternative to Pip, like Pipenv or Poetry. These tools offer advanced dependency management and will resolve all the dependencies automatically, if possible.

You can make your life a little easier by creating your requirements file using pip’s freeze option. First, write your software and install all the requirements you need as you go. Once you’re done, and everything seems to work fine, use the following command:

Pip created a requirements.txt file with all the currently installed dependencies, including version numbers. Neat!

Pip Install from a requirements.txt file

Finally, to install all the dependencies listed in this file, use:

Custom repository with pip install -i

The default PyPI repository is located at https://pypi.org/simple. You can use an alternative repository as well, though. For example, if your company only allows a subset of approved packages from an internal mirror. Or perhaps your company has a private mirror with their own package. This repository can be located on an HTTP(s) URL or on a file system location.

To specify a custom repository, use the -i or --index-url option, like so:

The URL must point to a repository compliant with PEP 503 (the simple repository API) or a local directory laid out in the same format.

Pip has the option to do an editable install, meaning you can install a package from a local source. But instead of copying the package files to some location on your system, pip creates symlinks to the codebase you’re installing it from. This way, you can work on the project and make changes and be able to directly test those changes without constantly reinstalling new versions of the package.

There are a number of reasons why you might need this option:

The editable install option is called with the -e option or --editable option. Let’s see what pip has to say about this option:

Typically, you will be working on a project using a version control system like git. While inside the root of the repository, you would install the project with:

If you’re not in the project root, you can simply supply the path to the package source code instead of using the dot.

To uninstall a package with pip, we can use the ‘uninstall’ subcommand, e.g.:

In line with the pip install command using a requirements file, you can also use such a file to uninstall packages:

We can also use pip to get more info about a package, or about the currently installed packages. Pip also offers a search function. Let’s explore these additional comands.

To list all the currently installed packages using pip, use the following command:

It will show both package names and versions. When you run the command inside a virtual environment, only the packages of the venv are shown. If you run it outside of a venv, all the system-wide packages will be listed.

Now that you know which packages are installed, you may need to inspect one in more detail. For this, we have the ‘show’ sub-command:

It’s a quick way to look up what a package is and does, and who authored it.

We used to be able to find all packages matching a certain string using pip. However, this introduced a big load on the servers over at PyPI. Unfortunately, they’ve decided to disable the feature. Luckily, we still have search engines like DuckDuckGo, Google, and Bing to find stuff!