Skip to content
Home » Structure Your Project: Modules And Packages » Python Modules: Bundle Code And Import It From Other Files 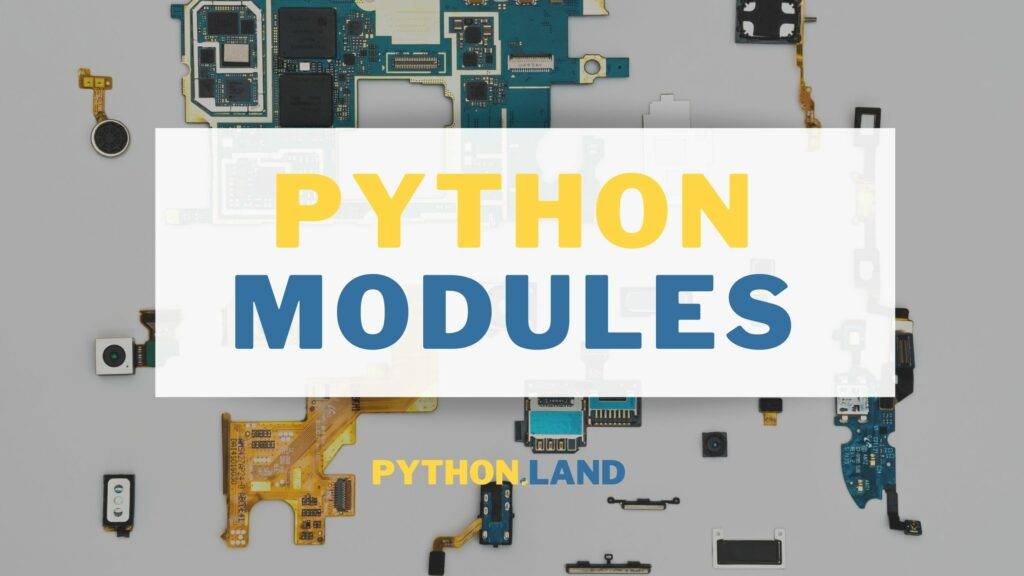 The Python import statement allows us to import a Python module. In turn, A Python module helps us organize and reuse our code. In this article, you learn about:

In the follow-up article, you’ll learn how to bundle modules in Python packages.

What is a module?

So a module is a file that contains Python code, ending with the .py extension. In other words: any Python file is also a module. The name of a module is the same as the file name, excluding the extension. For example, if you create a file named mymodule.py, the name of your module is mymodule.

Why do you need Python modules?

Modules have a lot to offer:

You can import a Python module by using Python’s import keyword. We usually place module imports at the top of a script, but we don’t have to. E.g., sometimes you want to dynamically decide if you need to import a module, especially when that module takes up a lot of memory or other resources.

Let’s create a simple module called mymodule.py. All it contains is the following function:

We can import this module in another script, but you must ensure the two files are in the same directory. To import the module, use the following command:

This imports the entire module and makes it available to the rest of the program under the name mymodule. After importing the module with import, we can use the function by using the following command:

To see this in action, you can run and play around with the following code crumb:

We can also import specific parts of a module, like a function, variable, or class. To do so, use the following syntax:

The my_funcion function is now available to the rest of the program under the name my_function, as if it was defined inside the file itself. So we can use it like this:

Similarly, we can import multiple elements from a Python module. To do so, use the following syntax:

It’s up to you when to do what. Sometimes, you need a function so often that referencing the entire module each time looks messy. Other times, it’s better to import the module name because you need a lot of different functions from that same module. Another consideration might be that it’s clearer to the readers of your code where a specific function, variable, or class is from when you reference it by using the entire module name.

When a module has a lot of functions and other elements you want to import, it can be tempting to import them all at once with a special from module import * syntax. To import everything from a module, we can use the following syntax:

You should avoid using the * syntax in most cases because it can lead to unexpected results, especially when using third-party modules over which you have no control. After all, you don’t know what’s inside a third-party module or what will be inside of it in the future. By importing everything, you ‘pollute’ your namespace with unnecessary variables, classes, and functions. You might even overwrite some existing definitions without noticing. My advice: only import specific elements to stay in control of your namespace.

Sometimes Python module names are not what you like them to be. Perhaps you need to type the name a lot, like in a Jupyter Notebook. In this case, you can use an alias to make the module name shorter. For example, if you have a module named mymodule.py, you can import it as m:

Some common aliases that you will encounter, especially in fields like data science, are:

In addition to these rules, there are some best practices to follow when naming modules. Notable:

A common mistake is to use reserved words or existing module names for your module. I’ve done so myself, e.g. by creating a module called http while Python already has a module with this name.

Another common cause of hard-to-debug errors is naming your module the same as a directory.

How to create runnable Python modules

Inside a module, you can detect if it is used as a module or a script. This is useful because it allows you to both run a module on its own and import it at the same time from other code as well.

You might have seen it before, and you might have wondered what it does. Why do Python programmers include this check in their script so often? It has everything to do with modules and using modules as scripts.

When we import a module, its name (stored in the variable __name__) is equal to the module name. When a script is executed, its name is always set to the string __main__. Hence, if we check for this name, we find out if we are running as a script or if we’re included somewhere as a module.

By executing code only when running in ‘scripting mode’, we effectively create files that can act as both a script and as a module that we can import.

You might wonder how modules compare to classes. They both group functionality, after all. There are significant differences, though, and there are good reasons for Python to have both modules and classes.

A module groups similar functionality or related functionality into one place. A module, for example, might contain classes, functions, and constants that we use to connect to a particular type of database.

A class models your problem domain. It provides a blueprint for one or more objects. E.g., a student class holds student data and related functions that work on that data. There can be many students, and hence there can be many student objects simultaneously. For more on this, read the chapter on classes and objects.