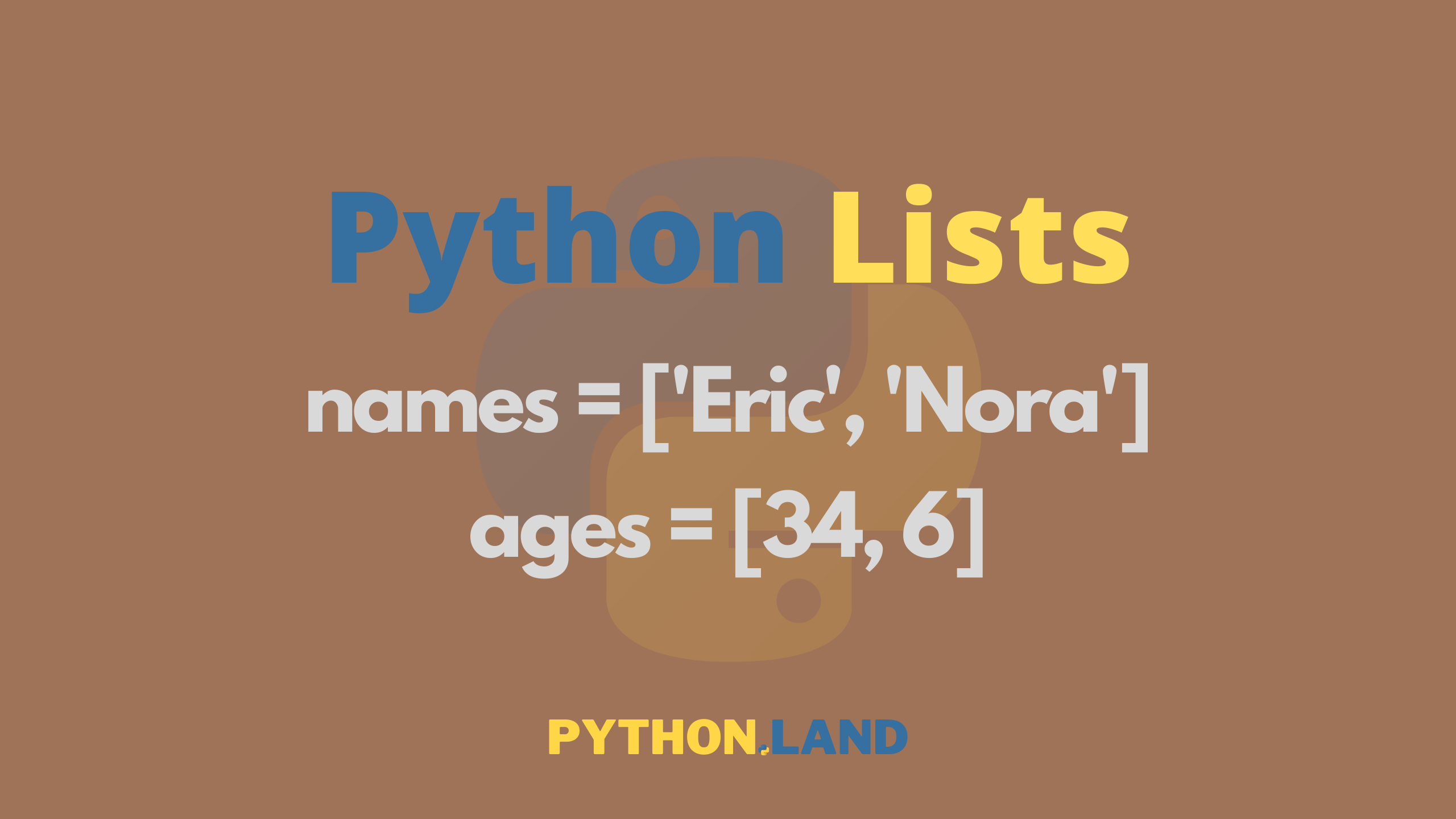 The Python list is one of the most used data structures, together with dictionaries. The Python list is not just a list, but can also be used as a stack and even a queue. Other languages often have arrays. In Python, arrays don’t exist, but lists offer all you would want from an array and more.

In this article, I’ll explain everything you might possibly want to know about Python lists:

Lists contain regular Python objects, separated by commas and surrounded by brackets. The elements in a list can have any data type, and they can be mixed. You can even create a list of lists. The following lists are all valid:

Python lists, like all Python data types, are objects. The class of a list is called ‘list’, with a lower case L. If you want to convert another Python object to a list, you can use the list() function, which is actually the constructor of the list class itself. This function takes one argument: an object that is iterable.

So you can convert anything that is iterable into a list. E.g., you can materialize the range function into a list of actual values, or convert a Python set or tuple into a list:

Here are a few examples:

As you can see, you can’t access elements that don’t exist. In this case, Python throws an IndexError exception, with the explanation ‘list index out of range’. In my article on exceptions and the try and except statements, I’ve written about this subject more in-depth in the section on best practices. I recommend you to read it.

If you want to get elements from the end of the list, you can supply a negative value. In this case, we start counting at -1 instead of 0. E.g., to get the last element of a list, you can do this:

List objects have a number of useful built-in methods, one of which is the append method. When calling append on a list, we append an object to the end of the list:

The pop() method removes and returns the last item by default unless you give it an index argument.

Here are a couple of examples that demonstrate both the default behavior and the behavior when given an index:

If you’re familiar with the concept of a stack, you can now build one using only the append and pop methods on a list!

There are multiple ways to delete or remove items from a list.

While pop returns the item that is deleted from the list, del removes it without returning anything. In fact, you can delete any object, including the entire list, using del:

As you can see, repeated calls to remove will remove additional two’s, until there are no two’s left, in which case Python throws a ValueError exception.

Remove or clear all items from a Python list

To remove all items from a list, use the clear method:

There is no special function or method to remove duplicates from a list, but there are multiple tricks that we can use to do so anyway. The simplest, in my opinion, is using a Python set. Sets are very similar to lists, but can only contain one of each element. More formally: sets are unordered collections of distinct objects.

By converting the list to a set, and then back to a list again, we’ve effectively removed all duplicates:

In your own code, you probably want to use this more compact version:

Since sets are very similar to lists, you may not even have to convert them back into a list. If the set offers what you need, use it instead to prevent a double conversion, making your program a little bit faster and more efficient.

In Python, we use the len function to get the length of objects. This is true for lists as well:

If you’re familiar with other programming languages, like Java, you might wonder why Python has a function for this. After all, it could have been one of the built-in methods of a list too, like my_list.len(). The reason for this is that in other languages, this often results in all kinds of ways to get an object’s length. E.g., some will call this function len, others will call it length, and yet someone else won’t even implement the function but simply offer a public member variable. And this is exactly the reason why Python chose to standardize the naming of such a common operation!

Don’t confuse the count function with getting the list length, it’s totally different. The built-in count function counts occurrences of a particular value inside that list. Here’s an example:

Since the number 1 occurs three times in the list, my_list.count(1) returned 3.

To sort a Python list, we have two options:

Option one, the built-in method, offers an in-place sort, which means the list itself is modified. In other words, this function does not return anything but instead modifies the list itself.

Let’s start with the simplest use-case: sorting in ascending order:

We can call the sort method with a reverse parameter. If this is set to True, sort reverses the order:

The following example demonstrates how to sort lists in ascending order, returning a new list with the result:

As you can see from the last statement, the original list is unchanged. Let’s do that again, but now in descending order:

However, lists can contain any type of object, and we can’t compare completely different objects, like numbers and strings, to each other. In such cases, Python throws a TypeError:

Although the error might look a bit cryptic, it’s only logical when you know what’s going on. To sort a list, Python needs to compare the objects to each other. So in its sorting algorithm, at some point, it checks if ‘a’ < 1, hence the error: '<' not supported between instances of 'str' and 'int'.

Sometimes you need to get parts of a list. Python has a powerful syntax to do so, called list slicing, and it makes working with lists a lot easier compared to some other programming languages. The list slicing syntax is as follows:

A couple of notes:

To explain how slicing works, it’s best to just look at examples, and try for yourself, so that’s what we’ll do:

The step value is 1 by default. If you increase it, you can step over elements. Let’s try this:

Just like with list indexing, we can supply negative numbers with slicing too. Here’s a little ASCII art to show you how counting backward in a list works:

Just remember that you need to set a negative step size in order to go backward:

There are actually three methods you can use to reverse a list:

The list.reverse() method does an in-place reverse, meaning it reorders the list. In other words, the method does not return a new list object, with a reversed order. Here’s how to use reverse():

Finally, you can use the reversed() built-in function, which creates an iterator that returns all elements of the given iterable (our list) in reverse. This method is quite cheap in terms of CPU and memory usage. All it needs to do is walk backward over the iterable object. It’s doesn’t need to move around data and it doesn’t need to reverse extra memory for a second list. So if you need to iterate over a (large) list in reverse, this should be your choice.

Here’s how you can use this function. Keep in mind, that you can only use the iterator once, but that it’s cheap to make a new one:

To check if an item is in a list, use the following syntax:

Find the index of an item in a list

With the index method, we can find where an item is inside a list. For example, in the following list the 4 is located at position 3 (remember that we start counting at zero):

The index method takes two optional parameters, start and stop. With these, we can continue looking for more of the same values. If we supply a start value, we don’t need to supply an end value. Now let’s find both 4’s in the list below:

If you want to do more advanced filtering of lists, you should head over to my article on list comprehensions.

There are two ways to combine lists:

Here’s how you can add two lists together. The result is a new, third list:

The original lists are kept intact. The alternative is to extend one list with another, using the extend method:

While l1 got extended with the elements of l2, l2 stayed the same. Extend appended all values from l2 to l1.

A list is iterable, so we can use a for-loop over the elements of a list just like we can with any other iterable with the ‘for <element> in <iterable>’ syntax:

In Python, you can convert most objects to a string with the str function:

If you’re interested, str is actually the Python string‘s base class and calling str() constructs a new str object by calling the constructor of the str class. This constructor inspects the provided object and looks for a special method (also called dunder method) called __str__. If it is present, this method is called. There’s nothing more to it.

If you create your own classes and objects, you can implement the __str__ function yourself to offer a printable version of your objects.

A Python list comprehension is a language construct that’s used to create a list based on an existing list, without the need for manually created loops. Because there’s a lot to tell about list comprehensions, I created a dedicated article for the topic.