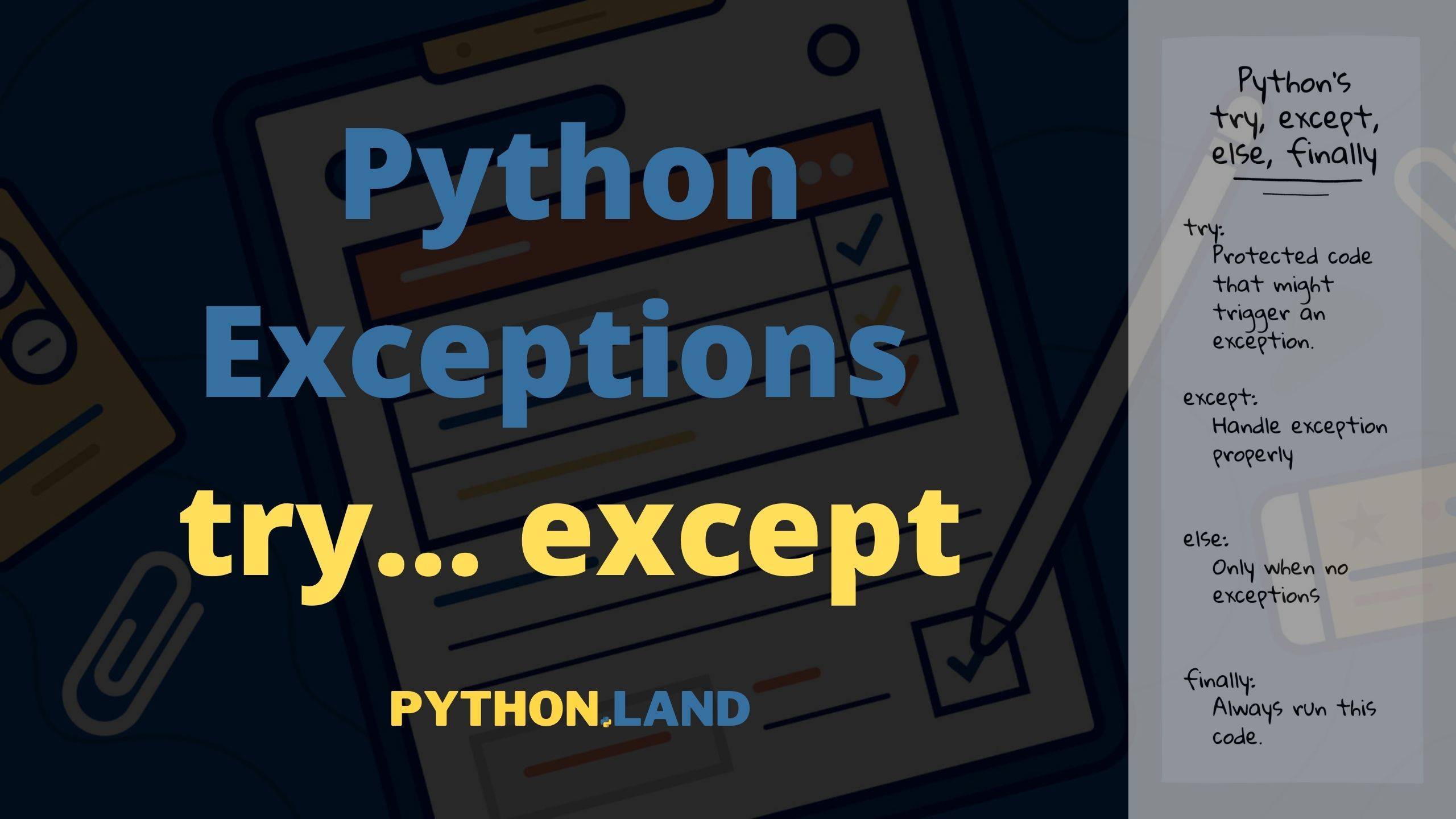 Python exception handling is the process of identifying and responding to errors in a program. In other words, it is a way to deal with errors that might occur in your program. In this article, you will learn how to handle errors in Python by using the try and except keywords. You’ll also learn how to create custom exceptions.

What is an exception?

An exception is a condition that arises during the execution of a program. It is a signal that something unexpected happened. In Python, exceptions are represented by an object of a certain type.

In the Python manual, you can view a complete hierarchy of exceptions if you’re interested. Here’s a small excerpt from this hierarchy, just to illustrate:

As demonstrated in the illustration, we can create a block of code by starting with a try statement. This basically means: try to run this code, but an exception might occur.

After our try block, one or more except blocks must follow. This is where the magic happens. These except blocks can catch an exception, as we usually call this. In fact, many other programming languages use a statement called catch instead of except. Each except block can handle a specific type of exception.

Remember: classes are hierarchical. For that reason, exceptions are too. Hence, except blocks must go from most specific, like a ZeroDivisionError, to less specific, like an ArithmeticError.

If we would start with an except block that catches Exception, for example, the first block would catch everything, rendering the others useless.

Please forget about else and finally for now. I’ll explain them in detail further down in this article. We first need to discuss call stacks, to truly understand how an exception finds its way to an exception handler.

If Python finds a suitable except block, it executes the code in that block. If it doesn’t find one, Python handles the exception by itself. This means it will print the exception and exit the program since it has no clue what to do with it.

I hope you’re still with me! If not, no worries. The examples on this page will hopefully make all this more clear. You might want to revisit this section once you’ve finished the entire article.

Catching exceptions with try except

Let’s finally write some actual code! If we want to handle an exception that was raised, we need to catch it. As we just learned, we can catch an exception by using the try and except keywords. When an exception occurs while we are inside the try block, the code in the except block is executed. Let’s try an example:

If you call a Python function inside the try block, and an exception occurs in that function, the flow of code execution stops at the point of the exception and the code in the except block is executed. Try doing this again, without try and except. You’ll see that Python prints the exception for us.

Let’s try another, more common example. After all, who divides a number by zero, right?

Please do the following:

If the interactive example doesn’t work for you, here’s the code to copy/past:

In the first case, the file is not found. You should get this output:

In the second case, after creating the file, you’ll still get an error. This time because we’re trying to write to a file that is opened in read-only mode. For more information on these modes, read the article on opening, reading, and writing files with Python. The error should look like this:

The finally and else blocks

Remember the other two blocks that I asked you to forget for a while? Let’s look at those now, starting with the finally block.

The finally block in try-except

Here’s an example of this at work, in which we open a file without using the with statement, forcing us to close it ourselves:

You should see the ‘Closing the file now’ message printed on your screen. Now change the writing mode to ‘r’ instead of ‘w’. You’ll get an IOError (not writable) as we did before. Despite this exception, the file is closed anyway.

The else block in try-except

When should you use the else block? And why shouldn’t you just add extra code to the try block? Good questions!

According to the Python manual, the use of the else clause is better than adding additional code to the try clause. But why? The reasoning is that it avoids accidentally catching an exception that wasn’t raised by the code being protected by the try and except statements in the first place. I admit I don’t use else blocks very often myself. Also, I find them somewhat confusing, especially for people coming from other languages.

Some exceptions are so common that you’ll inevitably encounter them. Here are a few of the most common ones:

Now that we know the mechanics of handling exceptions, there are a couple of best practices I’d like to share with you.

Don’t use blank except blocks

I’ve written about this before in the blog post ‘How not to handle exceptions in Python‘. When you want to catch a broad range of exceptions, don’t use a blank except block. By this, I mean something like:

All exceptions, including system exceptions, inherit from a class called BaseException. If an except clause mentions a particular class, that clause also handles any exception classes derived from that class. An empty except is equivalent to except BaseException, hence it will catch all possible exceptions.

So although the syntax is allowed, it’s not recommended. E.g., you’ll also catch KeyboardInterrupt and SystemExit exceptions, which will prevent your program from exiting. Instead, use a try block with a list of explicit exceptions which you know you can handle. Or, if you really need to, catch the Exception base class to handle almost all the regular exceptions, but not the system ones.

If you’re feeling adventurous, you can try to catch all exceptions and see what happens:

You’ll probably need to close your terminal to stop this program. Now change the except block to catch Exception. You will still catch almost all exceptions, but the program will exit on system exceptions like KeyboardInterrupt and SystemExit:

It’s better to ask for forgiveness

In Python, you’ll often see a pattern where people simply try if something works, and if it doesn’t, catch the exception. In other words, it’s better to ask for forgiveness than permission. This is in contrast to other languages, where you preferably ask for permission. E.g., in Java, exceptions can slow down your program and you “ask for permission” by doing checks on an object instead of simply trying.

To make this more concrete: in Python, we often just try to access the key in a dictionary. If the key doesn’t exist, we’ll get an exception and handle it. Suppose we just converted some externally provided JSON to a dictionary, and now start to use it:

This will print the error:

We could have added three checks (if 'name' in user, if 'age' in user, etc.) to make sure that all the fields are there. But this is not a good practice. It potentially introduces a lot of code just to check if keys exist. Instead, we ask for forgiveness in our except block once, which is much cleaner and more readable. And if you’re worried about performance: in Python exceptions don’t take up that many CPU cycles. Lots of comparisons are in fact slower than catching a single exception (if it occurs at all!).

For example, if you want to create an exception that indicates that a user was not found, you can create a `UserNotFoundError` exception. This would, in its most basic form, look like this:

This inherits all the properties and methods of Exception, but we give it a new name to distinguish it from the Exception class. This way, we’ll be able to specifically catch it with an except block. We’ll use this class in the example that follows.

We call a function, fetch_user, that fetches some user data from an imaginary database. If the user is not found, this database returns None. We decided that we don’t want to return None, which would force the caller to check for None every time. Instead, we use our custom UserNotFoundError.

Here’s a little assignment. We could have used a regular Exception object instead. That way, we don’t need to define a custom one. Why is this a bad idea?

You can in fact raise a regular exception, e.g. with raise Exception('User not found'). But if you do, you need to catch all exceptions of type Exception. And as we know, there are a lot of those. Chances are you inadvertently catch some other exception that you’re not able to handle. For example, the database client might throw a DatabaseAuthenticationError which is also a subclass of Exception.

How to print a Python exception

Exceptions can be printed directly as long as you catch them properly. You may have seen examples of this above already. To be clear, here’s an example of how to catch and print an exception:

If you’d like to print the call stack, just like Python does when you don’t catch the exception yourself, you can use the traceback module:

Here are some more resources to deepen your knowledge: