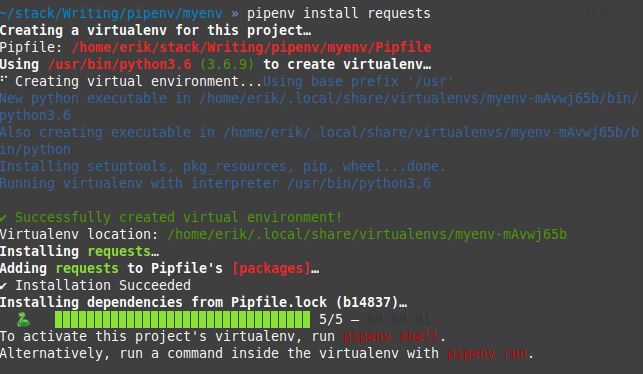 Pipenv is an alternative to Python Poetry that does similar things. Like Poetry, many prefer Pipenv instead of pip install and virtualenv separately. It’s up to you to decide which method you like better. Perhaps you get to work in a team or on an open source project where pip + virtualenv is the norm; that’s OK. Maybe, after reading this, you want to convince them to use pipenv instead! However, if you haven’t done so already, I’d suggest you take a look at Poetry first. It’s the better option if you ask me!

Using pipenv as a Python package manager has several advantages compared to using pip and virtualenv separately. These are the main ones:

Perhaps some of these points confuse you. Don’t worry, they will all be explained!

We can simply use pip to install pipenv:

The --user option installs pipenv for the local user only. If you use it, you ensure that you won’t interfere with system-wide packages. Honestly, I just installed it globally without any problems. If you get an error, that pip was not found, try pip3 or python -m pip. You may also want to review the Python installation instructions if you still have problems.

If you are on MacOS or Linux, I can also recommend Homebrew. Go to the Homebrew website to install it. After that, it’s as simple as:

How to use Python pipenv

Now that you have pipenv installed let’s try it!

First, create a directory. I called mine myenv. Now cd into the directory and install your first dependency with pipenv:

What happens next is:

The screenshot below shows pipenv in action on my system.

After it’s done, you can optionally enter the virtual environment with:

This is optional because you can launch any command directly in the virtual environment like this:

For example, to start a Python script inside the virtual environment:

How does Pipenv work?

I don’t like black boxes. I want to know what’s going on. So let’s first inspect Pipfile. It should look like this:

As you can see, Pipfile contains our top-level requirements without specifying a version number because we didn’t specify it. Now take a look at Pipfile.lock. It’s a big file, so I’ll just show a snippet here to illustrate:

requests and all of its dependencies are listed, including the version numbers. Basically, this is an advanced version of the output of pip freeze. These are the versions we worked with. It’s the combination of packages that is guaranteed to work.

But where’s the virtual environment? If you look closely at the screenshot in @fig:pipenv_in_action, you see the virtualenv is created in ~/.local/share/virtualenvs/myenv-mAvwj65b/. We could have asked pipenv too with pipenv --venv.

Since we are already familiar with the structure of a virtual environment, you’ll notice that this one is no different. It’s just located somewhere else, outside of your project structure. This way, you don’t need to exclude it from your version control system too.

It won’t be reused if you create another virtual environment with the same name in another location. The hash in the directory name is, I presume, based on the path to your virtualenv. Pipenv uses it to find the correct one despite double names.

Let’s look at some more features that set Pipenv apart from using plain pip and virtualenvs.

pipenv attempts to install all sub-dependencies required by your core dependencies. Conflicts might arise, though. If package A requires at least version 1.10 of package B, while package C requires version 1.9, you have a problem. pipenv can’t solve it for you, but it will warn you about it and refuse to continue by default. It also offers a nice insight into your dependencies with the pipenv graph command:

pipenv can scan your packages for security vulnerabilities. It does so by using the safety package. Enter:

and pipenv will scan your dependency graph for packages with known security vulnerabilities!