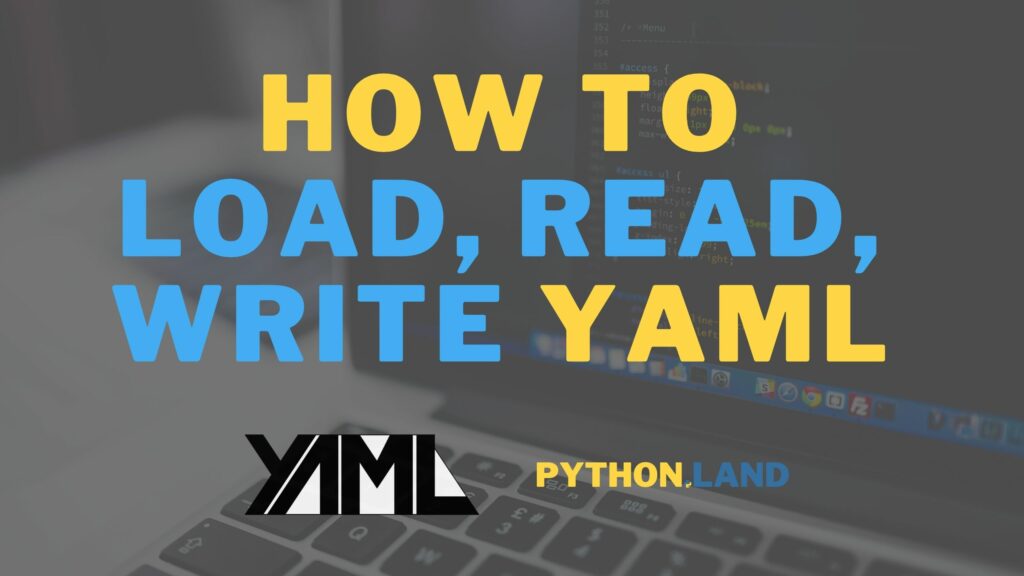 YAML, a recursive acronym for “YAML Ain’t Markup Language”, is a human-readable data serialization language. It is often used for configuration files, but can also be used for data exchange. The most used python YAML parser is PyYAML, a library that allows you to load, parse, and write YAML, much like Python’s JSON library helps you to work with JSON.

This article teaches you how to load, read, and write YAML files with PyYAML. In addition, you’ll learn how to install it on your system, and how YAML compares to alternatives like JSON.

According to the official site(1), YAML is a human-friendly data serialization language for all programming languages. YAML is most often used for configuration files, but it’s also used for data exchange.

YAML is easy to write and read for humans, even for non-programmers. At the same time, it’s also easy to parse YAML, especially with Python and the PyYAML library! Its human-friendliness and readability is the biggest advantage YAML has over other formats, like JSON and XML.

These are the most prominent features of YAML:

1) Fun fact, the official YAML website is written in the form of valid YAML files.

Why use YAML with Python?

If you ask me, YAML is perfect for configuration files. That’s exactly how I, and many other developers, use it the most. Others seem to agree, as many large projects, like Docker and Kubernetes, use YAML to define deployments. It has a richer syntax than the often used alternative, .ini files, but is still nice on the eyes and simple to write and parse.

There are some downsides to using YAML with Python too, though:

If you’re looking for a good data format for data exchange and storage, I recommend JSON, XML, or other more efficient formats like protocol buffers and Avro.

There are multiple Python packages that can parse YAML data. However, PyYAML is the most prevalent and also the most complete implementation for parsing YAML. PyYAML is not part of the standard Python library, meaning you need to install it with Pip. Use the following command to install PyYAML, preferable in a virtual environment:

On some systems you need to use pip3:

To use PyYAML in your scripts, import the module as follows. Note that you don’t import ‘pyyaml’, but simply ‘yaml’:

Reading and parsing a YAML file with Python

Once we have the YAML parser imported, we can load a YAML file and parse it. YAML files usually carry the extension .yaml or .yml. Let’s work with the following example YAML file, called config.yaml:

Loading, parsing, and using this configuration file is very similar to loading JSON with the Python JSON library. First, we open the file. Next, we parse it with the yaml.safe_load() function. Please note that I changed the output a little to make it more readable for you:

The YAML parser returns a regular Python object that best fits the data. In this case, it’s a Python dictionary. This means all the regular dictionary features can be used, like using get() with a default value.

Here’s the same example, but interactive, so you can experiment with this for yourself:

You can use yaml.safe_load() to parse all kinds of valid YAML strings. Here’s an example that parses a simple list of items into a Python list:

YAML allows you to define multiple documents in one file, separating them with a triple dash (---). PyYAML will happily parse such files too, and return a list of documents. You can do so by using the yaml.safe_load_all() function. This function returns a generator that in turn will return all documents, one by one.

Note that the file needs to be opened as long as you’re reading documents from the YAML, so you have to do your processing within the with clause. Here’s an interactive example that demonstrates this function:

Writing (or dumping) YAML to a file

Although most will only read YAML as a configuration file, it can be very handy to write YAML as well. Example use cases could be:

In the following example, we’ll:

Here’s the same code as a non-interactive example:

If you need to convert YAML to JSON, you can simply parse the YAML as we did above. In the next step, you can use the JSON module to convert the object to JSON.

In this example, we open a YAML-based configuration file, parse it with PyYAML, and then write it to a JSON file with the JSON module:

Here’s the same code as a non-interactive example:

For the sake of completeness, let’s do the reverse too: convert JSON to YAML:

You will encounter many examples of PyYAML usage where load() is used instead of safe_load(). I intentionally didn’t tell you about the load() function until now. Since most people have a job to do and tend to quickly copy-paste some example code, I wanted them to use the safest method of parsing YAML with Python.

However, if you’re curious about the difference between these two, here’s the short summary: load() is a very powerful function, just like pickle, if you know that function. Both are very insecure methods because they allow an attacker to execute arbitrary code. PyYAML’s load function allows you to serialize and deserialize complete Python objects and even execute Python code, including calls to the os.system library, which can execute any command on your system.

In recent PyYAML versions, the load() function is deprecated and will issue a big fat warning when you use it in an insecure way.

If you’re parsing regular YAML files, like 99% of us do, you should always use safe_load(), since it only contains a subset of the load function. All the scary, arbitrary code execution type of stuff is stripped out.

Here are some resources that you might want to continue with: