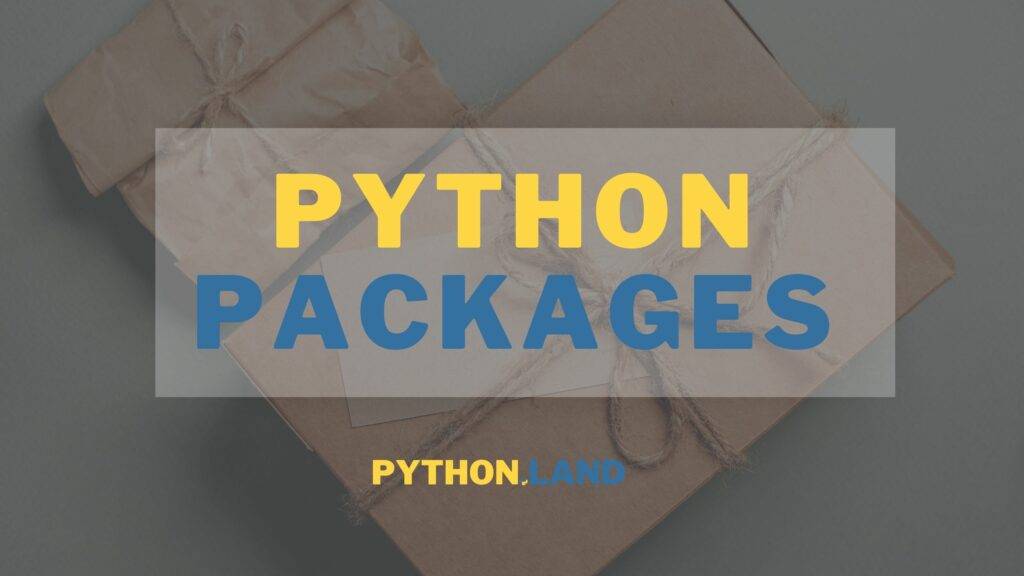 If you’re looking for how to install packages, you should read the article on installing packages with pip install instead. In addition, I can also recommend the article on virtual environments.

If you are unfamiliar with modules, read my article on Python modules first and then come back here. These two subjects are strongly related to each other.

What are Python packages?

A Python package is a directory that contains zero or more Python modules. A Python package can contain sub-packages, which are also directories containing modules. Each package always contains a special file named __init__.py. You’ll learn exactly what this mysterious file is for and how you can use it to make your package easier to import from.

Structure of a Python package

So a Python package is a folder that contains Python modules and an __init__.py file. The structure of a simple Python package with two modules is as follows:

As mentioned, packages can contain sub-packages. We can use sub-packages to organize our code further. I’ll show you how to do that in more detail in one of the sections below. Let’s first take a look at the structure of a package with sub-packages:

As you can see, packages are hierarchical, just like directories.

What is __init__.py in a Python package?

When importing the nested package from above, with import package_name.subpackage1, the __init__.py file of both package_name and subpackage1 are executed. The order is as follows:

I’ve added simple print statements to all the __init__.py files to demonstrate. We can create a main.py file in the package_name folder with the following contents:

If we run this program, the output will be:

The print statements in both __init__.py files are executed due to the import of our sub-package.

Organize your code in Python packages

We now have the following tools in our belt to properly organize our Python code:

You should use sub-packages to group related modules together. Using sub-packages also helps you keep package and module names short and concise. They are often a good alternative when you find yourself using underscores in package names.

Let’s create a package named httptools in the current directory. Our aim is that this imaginary package, one day, contains all the tools one might need to work with the HTTP protocol. We start simple, though, with just HTTP GET and POST requests and a simple HTTP server.

Some things to notice:

Now imagine that we want to jump on the async programming model. While our original server used to be synchronous, we now also offer an async variant.

There are three ways to add this to our codebase:

Which option would you choose?

Option 1 is the most straightforward. We can create a new package named httptools_async and copy the contents of the http package into it. Next, we change all the code to be async. A user of our original package might get away with changing a single line of code: change import http to import http_async. Since asynchronous programming is a completely different paradigm, this simple swap would probably not be enough though.

And then there’s option three: creating new modules with async appended to the module names. Although existing users would not need to change their code, I would not recommend this. It’s more logical to bundle the async modules in their own package, if only because you wouldn’t have to repeat the async prefix/postfix all the time when doing imports. It fits in the general objective of keeping package names and module names short and concise.

This is a common pattern in Python. It’s a good idea to import all the modules you need in the __init__.py file. If we use the import as described above, users of our package can import the get function like this:

Without the import in __init__.py, users of our package would need to do what we did ourselves to use the get function:

This is both more verbose and removes a bit of flexibility for us. If we decided to move the get function to some other file, it would introduce a breaking change for other parts of our code or users of our package. Because we import the function in the __init__.py of the client though, we have the flexibility to move that function around and simply change the import in __init__.py. To the users of our package, this would go unnoticed.

We’ve imported the get() function from the httptools.client.get module using an absolute import, meaning we specified the full tree leading to that function. You can also use a relative import. The advantage of relative imports is that you can import the module you want to use without knowing the full path. The package names might even change, without breaking the code. So relative imports make your code more robust to change.

A relative import in the __init__.py file of httptools.client looks like this:

This is also one of the cases where wildcards are useful. We can import all the elements in the httptools.client.get module using a wildcard:

This is not so bad, because we know exactly what we’ve put in get.py. In addition, we can change function names in get.py without needing to change import statements. This again makes the code more flexible.

Create a runnable package with __main__.py

I showed you how to create runnable modules in the lesson on modules. We can do something similar with packages by creating a file with the exact name __main__.py.

How to run a module in a package

To run a module from a package, we can use the following Python command:

This command can be used to run a specific module inside your package, e.g. python -m mypackage.mymodule, but we can also use it to run a package.

To create a runnable package, it needs a file name __main__.py in its root folder. This file can import and bootstrap anything you like. Note that we don’t need to add the if __name__=='__main__' check: we can be 100% sure the name of this module is, in fact, __main__ since we named the file that way.

If your module is called mymodule, you can now run it with the following command:

Let’s conclude by summarizing the information about Python packages and what we learned in the previous article on Python modules. A question that often pops up is this: what’s the difference between a module and a package?