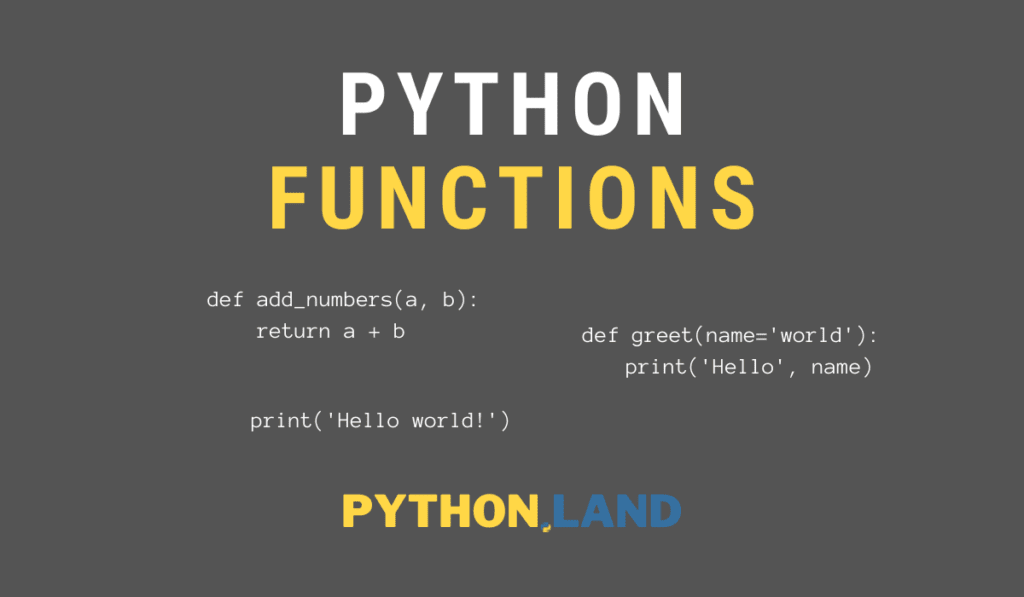 The function is a crucial concept in the world of programming. In this article, we’ll explore Python functions. You’ll learn why they are so important, how to define functions with Python’s def keyword, how to call functions, and we’ll learn about a topic that arises when using functions: variable scope.

What is a function in Python?

Let’s define what a function is, exactly:

Function
A Python function is a named section of a program that performs a specific task and, optionally, returns a value

Functions are the real building blocks of any programming language. We define a Python function with the def keyword. But before we start doing so, let’s first go over the advantages of functions, and let’s look at some built-in functions that you might already know.

A Python function can be defined once and used many times. So it aids in code reuse: you don’t want to write the same code more than once.

Functions are a great way to keep your code short, concise, and readable. By giving a function a well-chosen name, your code will become even more readable because the function name directly explains what will happen. This way, others (or future you) can read your code, and without looking at all of it, understand what it’s doing anyway because of the well-chosen function names.

Other forms of code reuse are explained later on. E.g., you can also group code into modules and packages.

Functions accept a parameter, and you’ll see how this works in a moment. The big advantage here, is that you can alter the function’s behavior by changing the parameter.

A function can return a value. This value is often the result of some calculation or operation. In fact, a Python function can even return multiple values.

Print takes an argument and prints it to the screen.

As stated in our definition, functions can optionally return a value. However, print does not return anything. Because it prints something to the screen, it might look like it does, but it doesn’t. We can check this by assigning the result of a print statement to a Python variable:

None is a special type of value in Python, basically meaning ‘nothing.’

Another built-in function, that does return a value, is len(). It returns the length of whatever you feed it:

Now that we know how to use a function let’s create a simple one ourselves. To do so, we use Python’s def keyword:

It’s just a few lines, but a lot is going on. Let’s dissect this:

Python uses indentation to distinguish blocks of code that belong together. Consecutive lines with equal indentation are part of the same block of code.

To tell Python that the following lines are the body of our function, we need to indent them. You indent lines with the TAB key on your keyboard. In Python, it’s good style to use four spaces for indentation. The entire Python community does so. If you hit the TAB key, the Python interactive shell (REPL) and all decent editors will automatically indent with four spaces.

We can make this more interesting by allowing an argument to be passed to our function. Again we define a function with def, but we add a variable name between the parentheses:

Our function now accepts a value, which gets assigned to the variable name. We call such variables the parameter, while the actual value we provide (‘Erik’) is called the argument.

As you can see, print() accepts multiple arguments, separated by a comma. This allows us to print both ‘hi’ and the provided name. For our convenience, print() automatically puts a space between the two strings.

Let’s make this even wilder and define a function with multiple arguments:

It’s not that hard; you just add more arguments to the function definition, separated by commas.

Returning from a function

A function runs until the end of that function, after which Python returns to where the function was called from. In the following example, I want you to predict the output before you run it:

Did your expectations match with reality? If so, you have a good understanding of how a function call works. Some people at this point expect to see the text “Let’s greet the entire world” twice. If you are one of them, don’t worry and keep reading.

In short: a function call is not a jump or ‘go to’, but a call to a piece of reusable code, which returns to where it was called from. A function call is also an expression: most functions return a value.

So far, our function only printed something and returned nothing. What makes functions a lot more usable is the ability to return a value. Let’s see an example of how a Python function can return a value:

As you can see, we use the keyword return to return a value from our function. Functions that return a value can be used everywhere we can use an expression. In the above example, we can assign the returned value to the variable result.

We could have used the function in an if statement as well. For example:

If your function does not return anything, but you still want to return from the function, you can use an empty return statement. Here’s a silly example:

This is an interesting pattern; I call it returning early. I’d like to return early because the alternative is using blocks of if… else statements:

Which one do you feel looks cleaner? I’d say the first because it requires less indented code. And although the difference is small with such a small example, this starts to add up when you have bigger chunks of code.

Scope
The visibility of a variable is called scope. The scope defines which parts of your program can see and use a variable.

If we define a variable at the so-called top level of a program, it is visible in all places.

say_hi was able to use the variable name, as expected, because it’s a top-level variable: it is visible everywhere. However, answer, defined inside say_hi, is not known outside of the function and causes a NameError. Python gives us an informative and detailed error: “name ‘answer’ is not defined.”

A compelling Python feature is the ability to provide default values for the parameters:

Or, if you prefer, use the interactive example below:

Because our parameters have a default value, you don’t have to fill them in. If you don’t, the default is used. If you do, you override the default with your own value.

Calling Python functions while explicitly naming the parameters differs from what we did up until now. These parameters are called named parameters because we specify both the name and the value instead of just the value. Thanks to these named parameters, the order in which we supply them doesn’t matter. If you think about it, it’s the natural and only way to make default values useful.

If you don’t want to use named parameters, you can. When you rely on position instead of names, you provide what we call positional parameters. The position matters, as can be seen below:

For now, you’ve learned enough about functions to continue with the tutorial. If you like to learn more, read my Python functions deep dive.