Skip to content
Home » Python Data Types » Python Set: The Why And How With Example Code 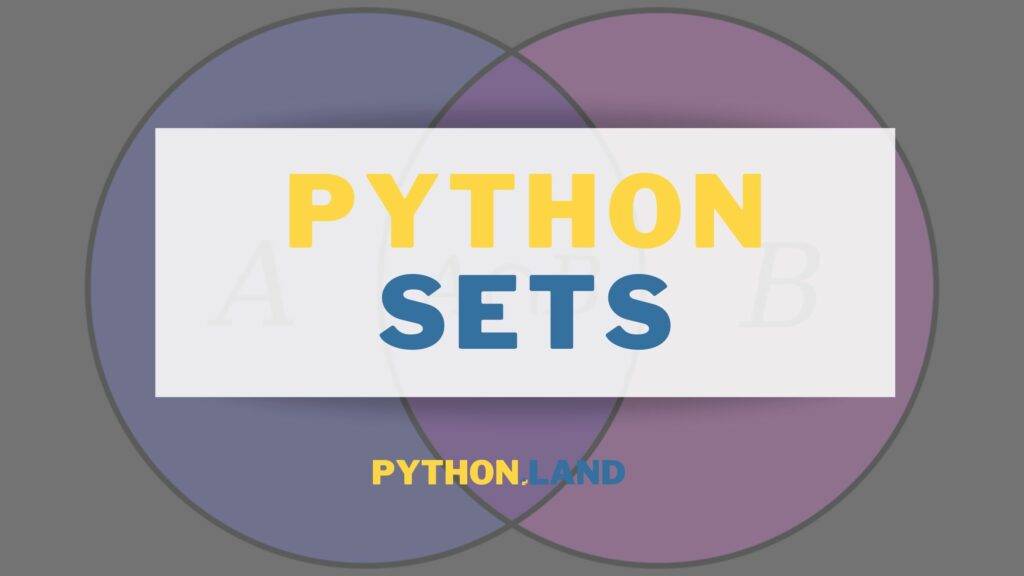 A Python set is a collection of distinct elements. The set has some things in common with lists and tuples, but there are important differences:

More formally: sets are unordered collections of distinct objects. In this article, we’ll take a close look at sets and how to use them. I’ll focus more on the extra’s that a set has to offer than on the basics that are the same for lists and other sequence types.

How to create a Python set

There are a couple of ways to create a Python set, depending on the situation. To create a set from scratch and directly add some elements to it, you can use curly braces:

Sets use the same curly braces as Python dictionaries, but they are easy to distinguish because a set always contains a sequence of elements, separated by commas. In contrast, dictionaries contain key-value pairs that are specified with colons.

To create an empty set, you can use the set() function:

As you can see, you can add elements to a set using the add method on a set object. If you want to add multiple elements at once, you need to use the update method and provide an iterable object like a list, range, or tuple:

You can also use the set() function to convert any iterable object into a set:

Here’s an example for the sake of demonstration. Remember that strings are sequence objects too, so they are iterable. Since we can filter a set comprehension, lets filter punctuation and space characters as well:

And with this example, it becomes abundantly clear that sets have no order!

Before we continue, I want to share two commonly used tricks that many people search for.

Sets only contain unique elements, and we can create a set by giving the set() function a list. Those are all the ingredients you need to deduplicate a list. Deduplication is the process of removing duplicates, and converting a list to a set is by far to easiest way to do this in Python:

To convert a set to a list, simply create a new list with the set as the argument:

Why would you need sets?

People use sets for a number of reasons.

But there are more reasons to use sets. If you’re not familiar with set theory, you might want to read up on it on Wikipedia. I’ll do my best to explain the basics too, though. In short: sets can be used to perform mathematical set operations like:

These operations can be visualized with a Venn diagram. Venn diagrams show the logical relation between sets. Chances are you’ve seen the following before in your life:

In the examples that follow, I’ll refer back to this image and I’ll use the names A and B. All the examples here use two sets, but it’s important to know that they work just as well with more than two sets.

This section will demonstrate and explain all the mathematical set operations. Don’t let the math part scare you, it’s not that hard!

Finding the difference between Python sets

We can do so by using the minus (subtraction) operator:

A and B have some overlap: the numbers 3, 4, and 5 are in both sets. These numbers fall into the section that is labeled with A ∩ B when looking at the Venn diagram. If we want only the unique numbers that are in A, we ‘subtract’ B from A by using A – B. When we only want the unique set of numbers from B, we subtract A from B: B – A.

Let’s look at some examples:

The < and > operators do the former, the check for a proper subset. If A < B, it means A is a subset of B and it’s not itself (A != A). You can check this for yourself too with A < A, which returns False. If you want to check for subset or equal to, you can use the <=. The same holds for supersets: use >=.

Finally, we can add two Python sets together and only keep elements that are unique. This is called a union of sets. In mathematics, the notation for a union is A ∪ B, but in Python, we must use the pipe operator (the |) to create unions:

All elements from A and B are present in the newly created set, but because sets only contain unique values, the overlapping element 3 is present only once.

Almost all the set methods have named equivalents, e.g.:

In the table at the end of this article, I’ll list all operations and their equivalent names.

The big difference between using the operator versus using the named methods is that the named methods take any iterable object as an argument. So you can calculate the union between set A and list L by using A.union(L). This saves us a conversion from a Python list to a Python set and thus is more efficient.

Besides the regular, mutable set, there’s also the frozenset. You can guess how this datatype differs from a regular set: it’s frozen directly after creation, so you can’t add or remove elements from it. However, you can mix the set and frozenset types: all the regular operations like union and intersection work on combinations of a set and frozenset too.

The advantage of a frozenset is that it’s hashable, meaning you can use it as a dictionary key, or even as an element in another set.

The following tables conveniently list all the mathematical set operations, the required operators, their named method equivalent, example code, and what it does:

Note that you can use the above operations in an assignment style too, e.g.:

The above works for intersections (&) and difference (-) too.

In the next table, I listed some extra operations that you can use to manipulate sets:

If you were hoping to access set elements by using indexing (e.g. with my_set[1]) you’re out of luck. Sets have no order, and thus can’t be indexed. If you think you need set indexing, you might be thinking in the wrong direction. Look at other solutions, like using lists or converting your set to a list.

We’ve looked at Python sets, and how they differ from other sequence types like lists and tuples. Besides deduplication of sequences, sets can be used to perform set calculations. We reviewed all the set calculations and looked at example code to see how they work. Using the convenient table, you can quickly review all the set operations.

Although I believe the article touched everything you need to know, you might want to look at the official documentation on sets as well.