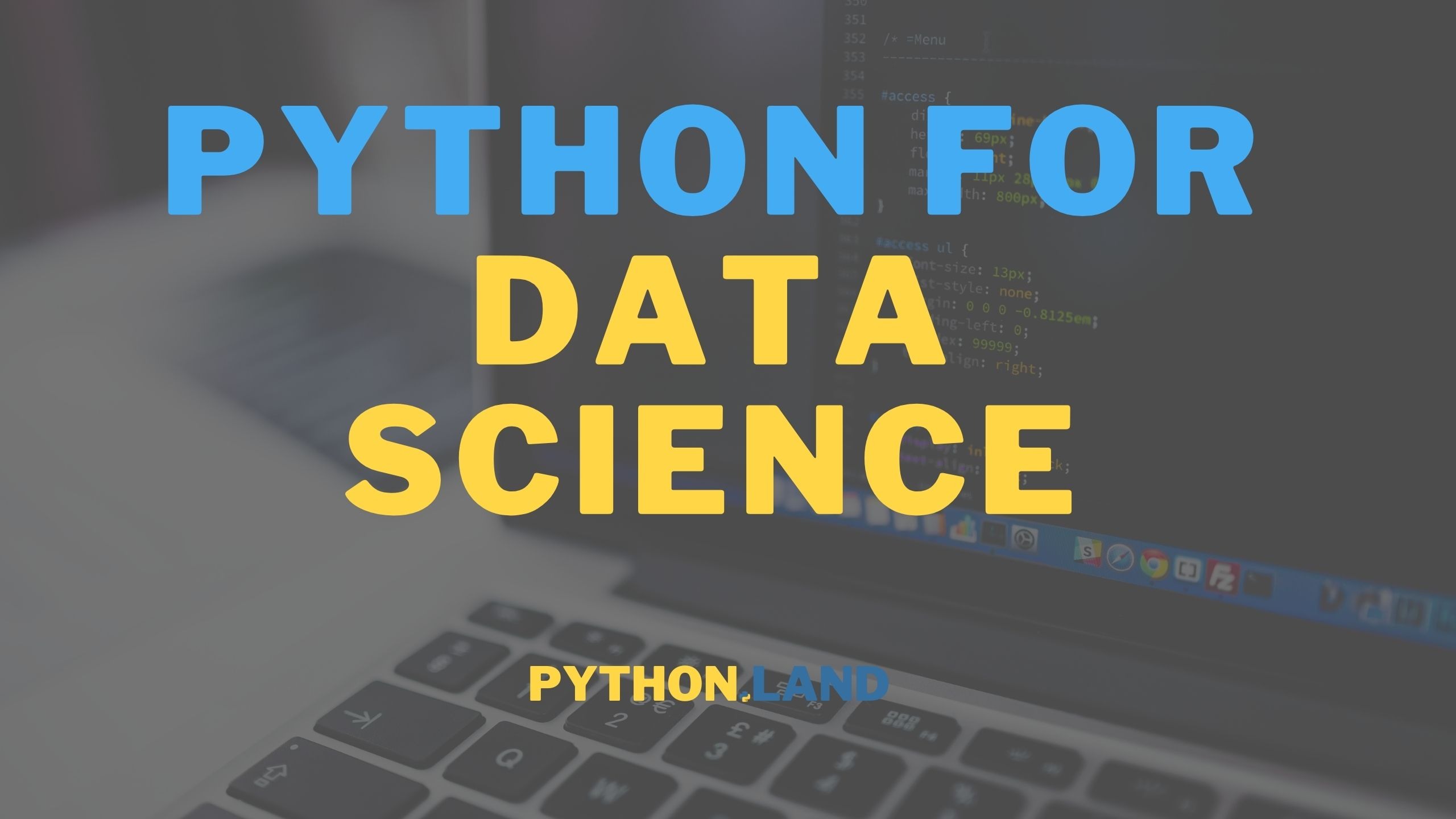 Python is the language of choice for a large part of the data science community. This article is a road map to learning Python for Data Science. It’s suitable for starting data scientists and for those already there who want to learn more about using Python for data science.

We’ll fly by all the essential elements used by data scientists while providing links to more thorough explanations. This way, you can skip the stuff you already know and dive right into what you don’t know. Along the way, I’ll guide you to the essential Python packages used by the data science community.

I recommend you bookmark this page so that you can return to it easily. And last but not least: this page is a continuous work in progress. I’ll be adding content and links, and I’d love to get feedback from you too. So if you find something along your journey that you think belongs here too, don’t hesitate to send me a message.

What is Data Science?

Before we start, though, I’d like to describe what I see as data science more formally. While I assume that you have a general idea of what data science is, it’s still a good idea to define it more specifically. It’ll also help us define a clear learning path.

As you may know, it’s hard to give a single, all-encompassing definition of a data scientist. If we ask ten people, I’m sure it will result in at least eleven different definitions of data science. So here’s my take on it.

To be a data scientist means knowing a lot about several areas. But first and foremost, you have to get comfortable with data. What kinds of data are there, how can it be stored, how can it be retrieved? Is it real-time data or historical data? Can it be queried with SQL? Is it text, images, video, or a combination of these?

How you manage and process your data depends on a number of properties, or qualities, that allow us to describe it more accurately. These are also called the five V’s of data:

Although you’ll hear about these five V’s more often in the world of data engineering and big data, I strongly believe that they apply to all of the areas of expertise and are a nice way of looking at data.

In order to read, process, and store data, you need to have basic programming skills. You don’t need to be a software engineer, and you probably don’t need to know about software design and such, but you do need a certain level of scripting skills.

There’s a reason the data science community has embraced Python initially. During the past years, however, many new super-useful Python libraries came out specifically for data science.

As if the above skills aren’t hard enough on their own, you also need a fairly good knowledge of math, statistics, and working scientifically.

Eventually, you want to present your results to your team, your manager, or the world! For that, you’ll need to visualize your results. You need to know about creating basic graphs, pie charts, histograms, and potting data on a map.

Each working field has or requires:

Generally, you’ll need to dive into what makes a field what it is. You can’t analyze data from a specific field of expertise without understanding the basic terminology and rules.

So what is a data scientist?

Coming back to our original question: what is data science? Or: what makes someone a data scientist? You need at least basic skills in all the subject areas named above. Every data scientist will have different levels of these skills. You can be strong in one, and weak in another. That’s OK.

To give an example: if you come from a math background, you’ll be great at the math part, but perhaps you’ll have a hard time wrestling with the data initially. On the other hand, some data scientists come from the AI/machine learning world and will obviously tend towards that part of the job and less to other parts. It doesn’t matter too much: in the end, we all need to learn and fill in the gaps. In fact, the differences are what make this field exciting and full of learning opportunities!

First stop when you want to use Python for Data Science: learning Python. If you’re completely new to Python, start learning the language itself first:

It helps a lot if you are comfortable on the command line. It’s one of those things you have to get started with and get used to. Once you do, you’ll find that you use it more and more since it is so much more efficient than using GUIs for everything. Using the command line will make you a much more versatile computer user, and you’ll quickly discover that some command-line tools can do what would otherwise be a big, ugly script and a full day of work.

The good news: it’s not as hard as you might think. We have a fairly extensive chapter on this site about using the Unix command line, the basic shell commands you need to know, creating shell scripts, and even on Bash multiprocessing! I strongly recommend you to check it out.

There are roughly two ways of using Python for Data Science:

Interactive notebooks have become extremely popular within the data science community, but you should certainly not rule out the power of a simple Python script to do some grunt work. Both have their place.

Check out our detailed article about the advantage of Jupyter Notebook. You’ll learn about the advantages of using it for data science, how it works, and how to install it. There, you’ll also learn when a notebook is the right choice and when you’re better off writing a script.

There are many ways to get the data you need to analyze. Well quickly go over the most common ways of getting data and I’ll point you to some of the best libraries to get the job done.

Often, the data will be stored on a file system, so you need to be able to open and read files with Python. If the data is formatted in JSON, you need a Python JSON parser. Python can do this natively. If you need to read YAML data, there’s a Python YAML parser as well.

Data from an API

Data will often be offered to you in the form of a REST API. In the world of Python, one of the most used and most user friendly libraries to fetch data over HTTP is called Requests. With requests, fetching data from an API can be as simple as this:

This is the absolute basic use-case, but requests has you covered too when you need to POST data, when you need to login to an API, etcetera. There will be plenty of examples on the Requests website itself and on sites like StackOverflow.

Sometimes, data is not available from an easy-to-parse API, but only from a website. If the data is only available from a website, you will need to retrieve it from the raw HTML and/or JavaScript. Doing this is called scraping and it can be hard. But like with everything, the Python ecosystem has you covered!

Before you consider scraping data, you need to realize a few things though:

Good scrapers will have options to limit the so-called crawl rate and will have the option to respect robots.txt files too. In theory, you can create your own scraper with, for example, the Requests library, but I strongly recommend against it. It’s a lot of work, and it’s very easy to mess up and get yourself banned.

Instead, you should take a look at Scrapy, which is a very mature, easy-to-use library to build a high-quality web scraper.

One of the reasons why Python is so popular for Data Science are the following two libraries:

Let’s look at these two in a little more detail!

NumPy’s core functionality is mostly implemented in C, making it very, very fast compared to regular Python code. Hence, Aas long as you use NumPy arrays and operations, your code can be as fast, or faster, than someone doing the same operations in a fast and compiled language.

Like NumPy, Pandas offers us ways to work with in-memory data efficiently. Both libraries have an overlap in functionality. An important distinction, however, is that Pandas offers us something called DataFrames. DataFrames are comparable to how a spreadsheet works, and you might know data frames from other languages, like R.

When working with tabular data, such as data stored in spreadsheets or databases, pandas is the right tool for you. pandas will help you to explore, clean, and process your data.

Every Python data scientist needs to visualize his or her results at some point, and there are many ways to visualize your work with Python. However, if I was allowed to recommend only one library, it would be a relatively new one: Streamlit.

Streamlit is so powerful, that it deserves a separate article to demonstrate what it has to offer. But to summarize: Streamlit allows you to turn any script into a full-blown, interactive web application without the need to know HTML, CSS, and JavaScript. All that with just a few lines of code. It’s truly powerful; go read about Streamlit!

Streamlit uses many well-known packages internally. You can always opt to use those instead, but Streamlit makes using them a lot easier. Another cool feature of Streamlit is that most figures and tables allow you to easily export them to an image or CSV file as well.

Another, perhaps more mature product, is Dash. Like Streamlit, it allows you to quickly create and host web apps to visualize data. To get an idea of what Dash can do, head over to their documentation.

You can read the book ‘Python for Data Science’ by Jake Vanderplas for free, right here. The book is from 2016, so it’s a bit dated. For example, at the time, Streamlit didn’t exist. Also, the book explains IPython, which is at the core of what is now Jupyter Notebook. The functionality is mostly the same, so it’s still useful.