Skip to content
Home » Classes and Objects in Python 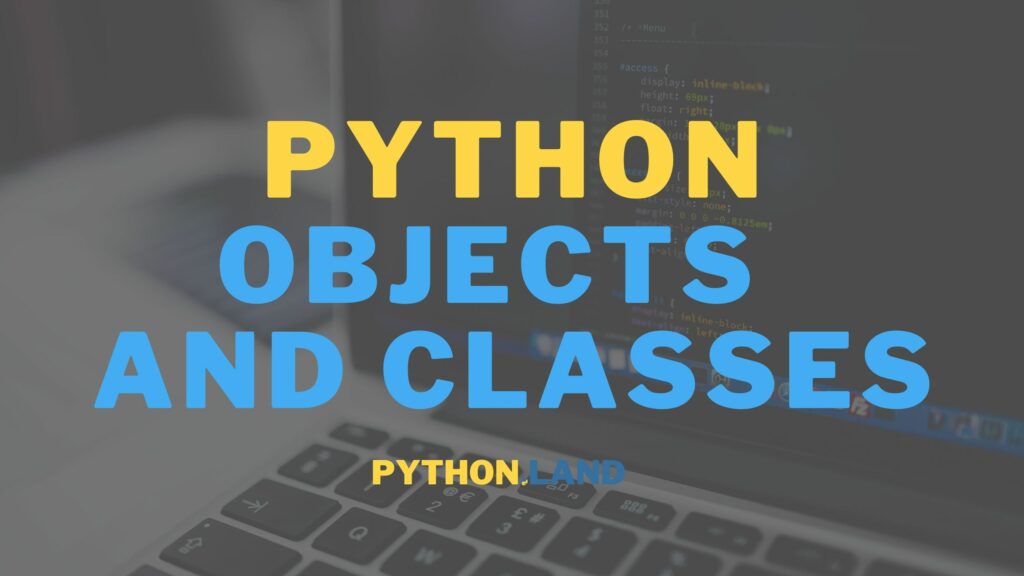 The Python class and Python objects are a crucial part of the language. You can’t properly learn Python without understanding Python classes and objects. In this chapter, you will learn:

Python objects: a look under the hood

Before we dive into all the details, let’s start by taking a look under the hood. I do this because I believe it will give you a much better understanding of these concepts. Don’t let the length of this page discourage you. After reading it thoroughly, and trying the examples yourself, you should have a good understanding of classes and objects in Python.

OK; let’s dive in! You probably know the built-in len() function. It simply returns the length of the object you give it. But what is the length of, say, the number five? Let’s ask Python:

I love errors because they illustrate how Python works internally. In this case, Python is telling us that 5 is an object, and it has no len(). In Python, everything is an object. Strings, booleans, numbers, and even Python functions are objects. We can inspect an object in the REPL using the built-in function dir(). When we try dir on the number five, it reveals a big list of functions that are part of any object of type number:

I truncated the list a little for the sake of clarity.

The list starts with these weirdly named functions containing underscores, like __add__. These are called magic methods, or dunder (short for double underscore) methods. If you look closely, you’ll see that there’s no __len__ dunder method for objects of type int. That’s how Python’s len() function knows that a number does not have a length. All len() does, is call the __len__() method on the object you offered it. That’s also why Python complained that “objects of type ‘int’ have no len().”

What are Python Methods?

I casually introduced the word methods here. Let me define it more formally:

Method
When a function is part of an object or Python class, we call it a method.

Strings do have a length, so a string must have a len method, right? Let’s find out!

Yup, there it is. And since this is a method, we can call it too:

This is equivalent to len("test") but a lot less elegant, so don’t do this. It’s just to illustrate how this stuff works.

There’s also a list of other, less magical methods that dir() revealed to us. Feel free to try a few, like islower:

This method checks if the entire string is lower-case, which it is, so Python returns the boolean True. Some of these methods require one or more arguments, like replace:

It replaces all occurrences of ‘a’ with ‘b’.

Sometimes programming might feel a bit like doing magic, especially when you’re just starting out. But once you take a peek under the hood and see how things actually work, a lot of that magic is gone. Let’s continue and find out what objects really are, and how they are defined.

What is a Python object?

Now that we’ve used objects and know that everything in Python is an object, it’s time to define what an object is:

Object
An object is a collection of data (variables) and methods that operate on that data. Objects are defined by a Python class.

Objects and object-oriented programming are concepts that became popular in the early 1990s. Early computer languages, like C, did not have the concept of an object. However, it turned out that objects are an easy-to-understand paradigm for humans . Objects can be used to model many real-life concepts and situations. Most, if not all, new languages have the concept of objects these days. So what you’re about to learn will conceptually apply to other languages too: this is fundamental computer science.

What is a Python class?

Since objects are the building blocks of the Python language, it’s only logical that you can create objects yourself too. If you want to create your own type of object, you first need to define its methods and what data it can hold. This blueprint is called a class.

Class
A class is the blueprint for one or more objects

All Python objects are based on a class. When we create an object, we call this ‘creating an instance of a class’. Strings, numbers, and even booleans are instances of a class too. Let’s explore with the built-in function type:

Apparently, there are classes called str, int, and bool. These are some of Python’s native classes, but, as I said, we can build our own types of classes too!

No tutorial is complete without a car analogy, so let’s make a Python class that represents a car. It’s a lot to type in, and you have to start over on each mistake. Feel free to try, but I understand if you want to take a shortcut. Just copy and paste the following class into your Python REPL. Make sure to hit enter twice after pasting it:

Don’t worry, we’ll go over the class definition step by step, but let’s first create and use a Python object of type Car:

If you prefer, you can also use the following crumb to play around with our newly created Car class:

An object in Python is always an instance of a class. One class can have many instances. We just created an instance of class Car, with Car(), and assigned it to the (lowercase) variable car. Creating an instance looks like calling a function ;  you’ll learn why later on.

Now let’s go over our Car class step by step:

In the definitions of these methods, we encounter something peculiar: they all have an argument called self as their first argument.

What Is self in Python?

Honestly, this is one of Python’s less elegant language constructs if you ask me.

Remember when we were calling the methods on our car object, like car.start()? We didn’t have to pass the self variable, even though start() is defined as start(self) inside the class.

This is what’s happening:

Since a Python class is just a blueprint, you can use it to create multiple objects, just like you can build multiple identical-looking cars. They all behave similarly, but they all have their own data that is not shared between objects:

We created two car objects here, car1 and car2, and used the built-in method id() to get their ids. Each object in Python has a unique identifier, so we just proved that we created two different objects from the same class. We can use them independently:

We just started car1 and increased its speed, while car2 is still halted. Inspection of the speeds confirms these are different cars with different states!