Skip to content
Home » Interaction with the Operating System » Python Read And Write File: With Examples 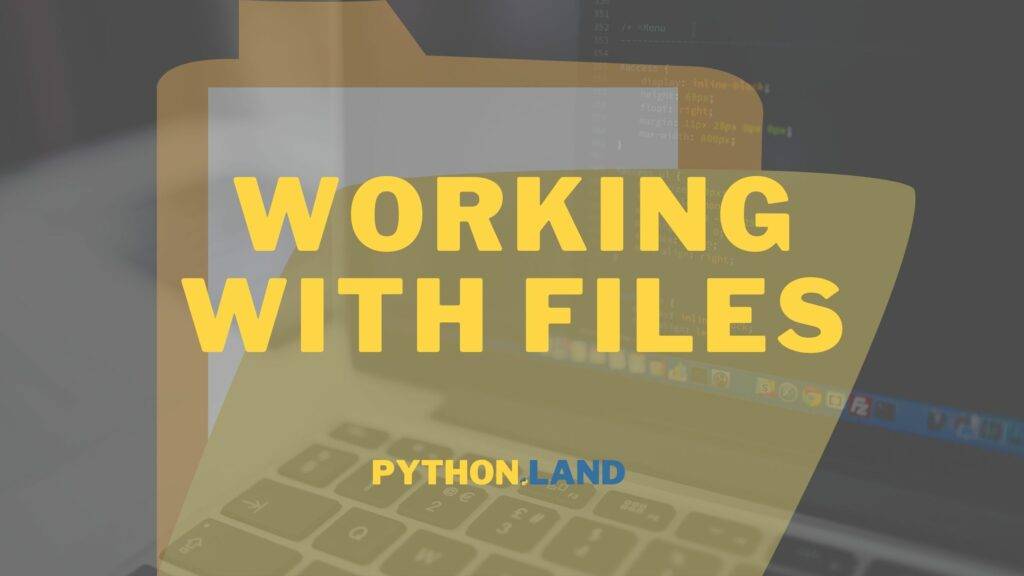 Files are an essential part of working with computers, thus using Python to write to and read from a file are basic skills that you need to master. In this article, I’ll show you how to do the things you came here for, e.g.:

When working with files, there will come that point where you need to know about file modes and permissions. I included an explanation on this topic as well, in case you need it.

Open a file in Python

In Python, we open a file with the open() function. It’s part of Python’s built-in functions, you don’t need to import anything to use open(). The open() function expects at least one argument: the file name. If the file was successfully opened, it returns a file object that you can use to read from and write to that file.

As soon as you open a file with Python, you are using system resources that you need to free once you’re done. If you don’t, you create a so-called resource leak. If you do this often enough, you might run into problems, because there’s a limit to the number of open files a regular operating system user can have.

This doesn’t have to be a problem though. When your program exits, all resources are freed up automatically. That’s nice and considerate of the Python devs, but a lot of software keeps running indefinitely. With such software, you need to be more careful and close the resources you don’t need anymore. This way, you make sure other software can access the file safely. Also, when you open a lot of files, each open file takes up memory and other resources. For these reasons, it’s a good habit to close a file when you’re done with it.

Closing a file used to be a manual task, that can be forgotten easily. Luckily, Python has the ‘with’ statement to help us out. We’ll discuss the with statement soon. I first want to show you the ‘old fashioned way of doing things.

The old fashioned way to open a file

To illustrate why the with statement is so useful, let’s first open and close a file in the traditional, manual way:

If you’re feeling adventurous, try and remove the f.close(). It should work the same; Python won’t complain and will close the file resource on exit.

If the interactive example above doesn’t work for some reason, here’s a text version of the same code:

In the example above, you can see how we read all contents from the file so we can print it. If you want to read all the file content into a single string, at once, use the read() method on a file object, without arguments. This is no problem for small files, but do realize that you load all the contents into memory at once. This could be a problem with large files, but we’ll get to that soon.

Using with open() in Python

There’s a potential problem in the previous example. If an exception occurs while Python reads the file, the f.close() call will never be reached. And this is a trivial example, but you can imagine that with more complicated software, in which exceptions might get caught so the software can keep running, it can go wrong quickly.

Another problem that may arise, is that you simply forget to write the close() call. It happens, we are all humans. Therefore, with modern Python, it’s recommended to use the with-statement when you can. By using Python’s with open(), the opened file resource will only be available in the indented block of code:

If the interactive example above doesn’t work for some reason, here’s a text version of the same code:

In this example, the with-statement makes sure the file is closed, even if an exception occurs. That’s because Python closes the resource automatically as soon as we step out of the scope of this with-statement. Due to this automatic close, you can not use the file (called f in our case) outside of the with-statement. If you want to use it again, you have to open it again.

So far, we used the open() function with just one argument: the file name. It’s a mandatory argument, but open() also has a number of optional extra arguments, like the file mode. This mode defaults to ‘rt’, which stands for ‘read text’. You’re opening the file for reading, which means you can not write to it, and you’re expecting it to be a text file.

Other modes that you can pass are listed in the following table:

I won’t go into the details of all the modes here but instead, I’ll explain and demonstrate most of them in the appropriate sections below.

Now that you know about file modes and how to open a file, we can use Python to write to files as well. We can do so in three steps:

Write expects one argument in this case: a Python string. If you have data of another type, like a number, you need to manually convert it to a string. After all, text files don’t have the concept of data types: they simply contain text.

In the example below, we convert integers to strings using the str() function, and write them to the file:

If the interactive example above doesn’t work, here’s the same code:

There is now a file on your file system (in the same directory as your script), with the following content:

Did you expect each number to be on a new line?

When writing files, you need to explicitly specify newline characters. You can try this in the interactive example above. Adapt the code to make it look like this:

Note that I used an f-string here. I personally like them a lot, but you can also use something like str(i) + '\n'.

Python append to a file

Now that we have a test file, we can also append some extra data. By default, when we open a file for writing, we overwrite anything that’s already present. So, again, we first look in the file modes table above which mode we can use to append data to our file. We need mode ‘a’, for append.

In the following example, we:

If the interactive example above doesn’t work, here’s the same code:

With small files, it can be convenient to read all lines at once into a list. There are two ways to do this:

You don’t always have the luxury of reading files at once. For instance, when you need to work with 140 GB-sized log files, you can’t read it all into memory and get away with it. Your program will likely crash, or at least become extremely slow.

It is much more efficient to parse the file line-by-line in such cases. To read a file line by line, we can treat the opened file as an iterator. After opening the file, we can use a Python for-loop to iterate over the lines:

Python has built-in modules to perform common file operations, like deleting files, creating directories, moving files, and so on. Most of these functions are available in the os module, so you’ll need to import it first. In this section, we’ll visit some of the operations you might need to perform.

Use Python to check if file exists

To check if a file exists, we can use the isfile function:

This will return True if the file exists, and False if it doesn’t.

Use Python to check if a directory exists

Similarly, to check if a directory exists, we can use the isdir function:

To create a directory, use the mkdir function from the os module:

To delete a file, we can use the following command:

This will delete the file. If the file doesn’t exist, it will raise an exception.

Rename (or move) a file

To rename or move a file, we can use the following command:

A rename operation works as long as the file stays on the same file system. If you want to move a file from one file system to another, you need the higher-level move function from shutil, as explained below.

Move a file with shutil

To move a file in a way that resembles the mv command on the terminal shell, we can use the shutil module. An important distinction from os.rename is that this function can move files between file systems as well. Rename can only rename/move a file within the same filesystem:

The shutil module is a more high-level module, and provides a number of functions that can be used to copy single files or copy and remove entire trees of files:

I’ve written a detailed tutorial on how to work with exceptions and try-catch blocks that you might want to read.

Permissions are specified per file. When you list a directory, you’ll be able to see its permissions. For example, under Linux, we can do so with the ls -l command:

In the output, you see two dummy files I created for demonstration purposes. The first is a script file, and the second is a Python file called myapp.py. At the start of the line, you see cryptic letters like r, w, and x that define the file permissions. Files can have the following permissions:

Knowing what permissions there are is not enough, though. As you can see in the example listing above, the r gets repeated three times for each file. If you were wondering why: computer systems usually have multiple users and groups.

The permissions are listed in this order as well. So we have three permissions fields for each access type, resulting in a nine-character long string. The following ASCII art should clear things up:

Finally, there are several file types. The most well-known are regular files and directories, but there are more types. This is the complete list:

To demonstrate, you can inspect the file /dev/random:

It’s a character device that offers a stream of random data when read from. As you can see, it’s writable as well. In this case, writing to /dev/random will update the entropy pool.

There’s a lot more to learn, and you might also like to dive into our section on using the Unix shell. So go and explore if you want or need to, but this quick introduction here should get you started.

Use these resources to expand your knowledge and understanding:

2 thoughts on “Python Read And Write File: With Examples”