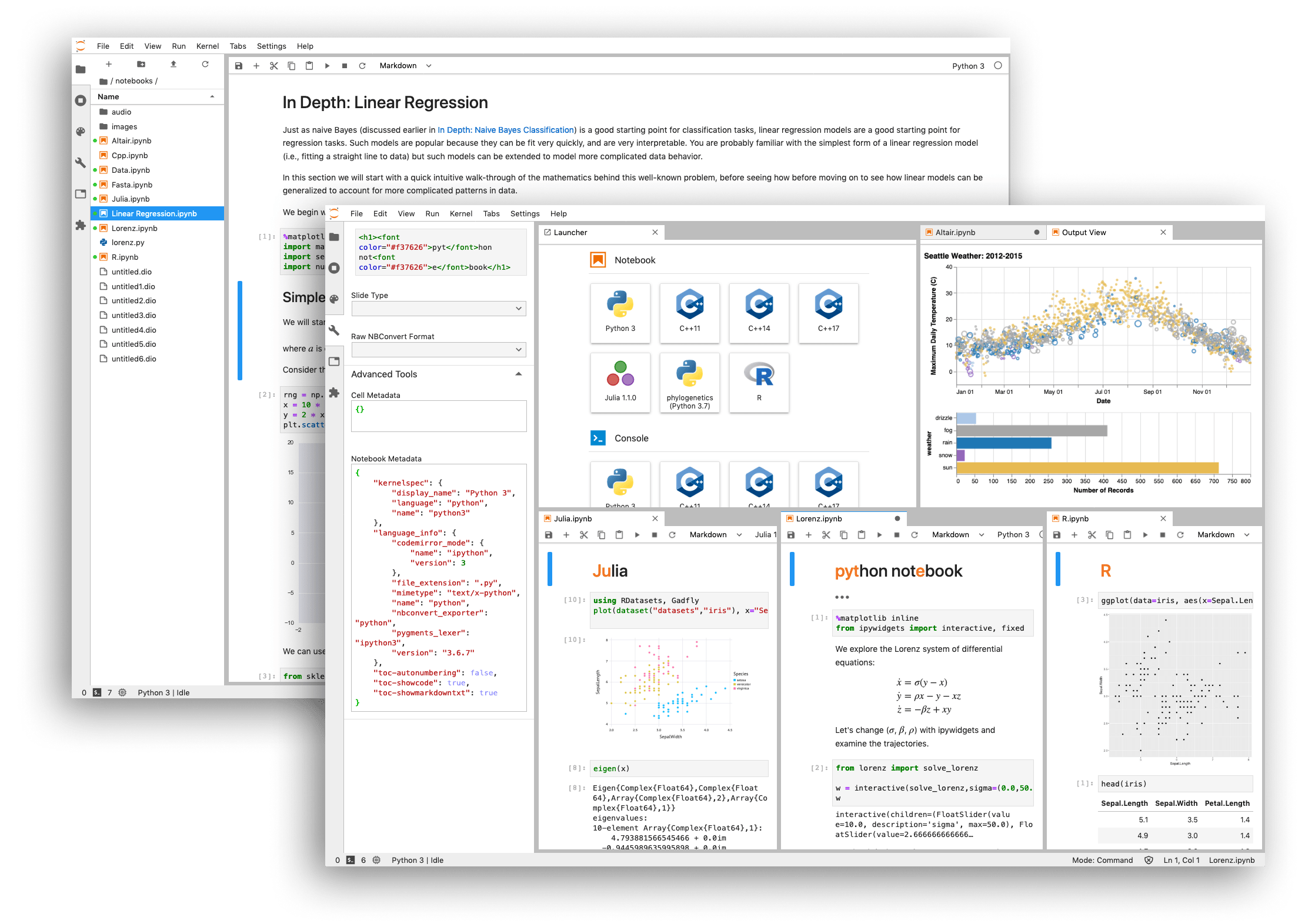 Learn about Jupyter Notebook, part of the Jupyter Lab interactive IDE that is ideal for Data Science. We’ll explore the advantages of using it over a regular IDE, show you how to install Jupyter Notebook and Jupyter Lab, and demonstrate its abilities.

JupyterLab is a web-based, interactive development environment. It’s most well known for offering a so-called notebook called Jupyter Notebook, but you can also use it to create and edit other files, like code, text files, and markdown files. In addition, it allows you to open a Python terminal, as most IDEs do, to experiment and tinker.

JupyterLab is flexible: you can configure and arrange the user interface to support a wide range of workflows in data science, scientific computing, and machine learning. It’s also extensible: everyone can write plugins that add new components and integrate with existing ones.

JupyterLab supports over 40 other programming languages, like Java, Scala, Julia, and R. However, I’ll focus solely on Python in this article.

Python application developers often prefer and work with a regular Python IDE like VSCode, which facilitates debugging, unit testing, deployment, and version management. In contrast, (data) scientists and data analysts have a different focus and often prefer a Notebook style IDE. Let’s look at some of the advantages these notebooks have to offer.

Combine and document code and results

The biggest advantage of using notebooks is that it allows you to combine three things into one environment:

All the while offering an interactive environment in which you or your fellows can tinker and experiment. The following image perfectly demonstrated this:

A Notebook allows you to explore your data interactively. While doing so, the Notebook serves as a log of what you did and how you did it. So a Notebook is much more geared toward those working with and analyzing data than regular IDEs. However, some IDEs, like VSCode, will offer a built-in Jupyter Notebook (see further down this article).

It’s what the others use

Sometimes it helps to go with the flow. In this case, you’ll notice that many others in data science are using Jupyter Notebooks. This has a couple of advantages on its own:

How to install Jupyter Notebook and Lab

Like all Python software, installing Jupyter Lab is a breeze. I’ll demonstrate how to install with both Pip and Conda. One thing to note beforehand: I recommend installing this system-wide. With most packages, I’m stressing the importance of using a virtual environment. However, tools like this you want to install once.

As noted above, you want to install Jupyter Lab system-wide, or at least in your local bin folder. Installing the package globally with Pip requires the -g option. On many Linux systems, however, Pip will install the package in a .local/bin folder if you don’t specify -g and if you’re not using a virtual environment. You can force this behavior by using the --user option. The advantage is that you don’t need root access to the system you’re working on.

So, the most recommended way to install Jupyter Lab is to use the pip install command:

If you only want Jupyter Notebook, use this instead:

JupyterLab can be installed with mamba and conda as well:

Like with Pip, if you want to only install Jupyter Notebook, use this:

How to open Jupyter lab from the command-line

If you followed the installation instructions, you should be able to start Jupyter Lab with:

How to open Jupyter Notebook from the command-line

If you want to only start a Notebook, use this:

Adding to your PATH

If you get an error like “command not found”, don’t panic just yet. Unfortunately, some systems don’t have the .local/bin directory in the $PATH variable. On Linux and OS X, a quick fix is to add it temporarily like this:

However, this will only work as long as you keep the terminal window open. So, to make this permanent, I recommend adding the following snippet to the end of your ~/.profile file:

All it does, is add the .local/bin folder to the PATH, but only if it actually exists.

The .profile file is loaded once when you login to your system. You you probably need to logout and login to apply the changes. In case you use zsh instead of Bash (zsh is the default on MacOS these days), you may want to try adding the snippet about to a file called .zprofile instead.

Your first steps in a Notebook

If you start Jupyter Lab or Notebook, it will automatically open your browser. If it didn’t, you can go to http://localhost:8888/ manually to open it. Once there, create a new Notebook, e.g. by clicking File -> New -> Notebook.

In the following screenshot, I created a new Notebook named ‘First steps’. There are a couple of noteworthy things to see:

At the top of your notebook, there is a dropdown that allows you to change the cell type. All you need to care about for now, are the types ‘Python’ and ‘Markdown’.

A Python cell contains Python code. This can be any valid code, so all these are allowed:

Markdown is a lightweight markup language for creating formatted text. You can use it to create headers, lists, code snippets, and most other things you can think of. You might be familiar with it if you ever created a README.md file on GitHub, for example.

Markdown is great for adding documentation to your notebook. For most, the use of a Markdown cheat sheet is enough to get started quickly.

You can enter nice-looking formulas using Markdown as well. Internally, Jupyter uses MathJax to format and display formulas. A formula starts and ends with either a single or a double dollar sign:

Inside, you need to enter a Tex-based equation. If you want to see all the options and play around with such equations, I recommend this website that offers a Tex equation editor.

If you click on the puzzle icon at the left of the screen, you’ll get a list of plugins that can be installed directly. There are lots of plugins, and many of them will add extra visualization capabilities or integration with products like Tableau.

Internally, Jupyter Notebooks use a project called IPython. If you tend to use the Python REPL a lot, I recommend you to read our page on IPython since it is a great alternative to the regular REPL. I use it a lot personally, and I can’t recommend it enough! For example, it’s worth it just for its terrific auto-completion, and if you are used to Jupyter Notebooks, you’ll feel right at home, obviously.

If you’re a VSCode fan, like me, you need to check out the VSCode extension that allows you to create and work with notebooks directly inside a VSCode tab. If you open up the command pallet, e.g. with ctrl + shift + p, start typing “Jupyter” to create, open, and export Notebooks.

It’s always worth visiting the official project website, for the latest news and documentation around Jupyter Lab and Jupyter Notebook.