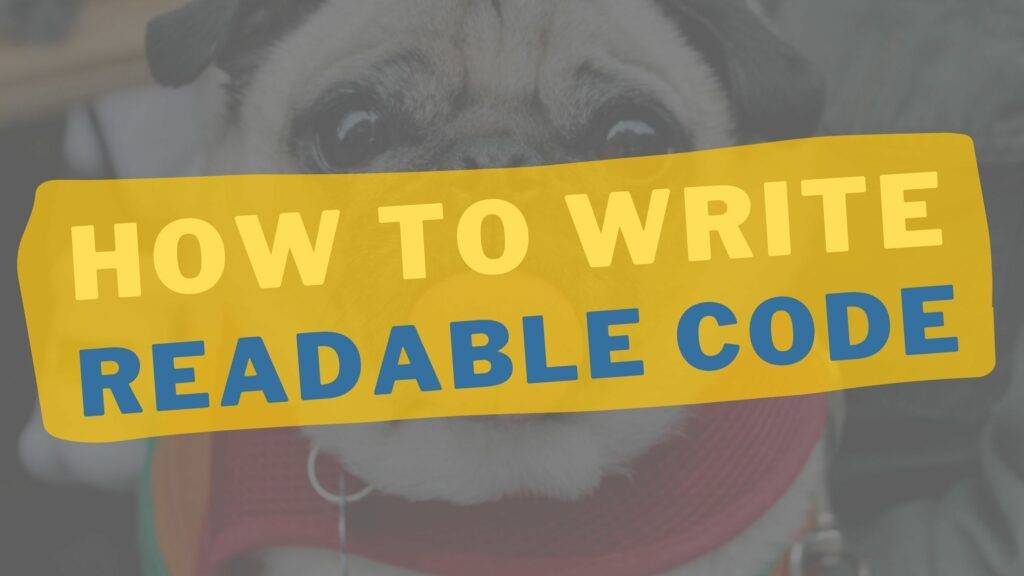 I’ve seen too much code in my career that was written so badly that I had to throw it away and redo the entire project. And the most painful fact is that this code was not written by beginners either!

Chances are, much of your code:

There… I’ve said it. Sorry if that sounded harsh, but it’s the painful truth.

Writing nice, readable code takes time and effort that you sometimes just don’t have. But it’s also a matter of learning the right habits. With these simple tweaks to your coding style, you can improve your code quality ten-fold without much effort.

Extract as much as you possibly can into functions and make these functions do one thing. Name them accordingly.

For example, you might want to create a function that reads a file into a string and name it read_file_to_str(file_name: str). Without reading your code in detail, people will know what it does. They don’t need to dive into the function to see what it does.

Ideally, your code is a sequence of function calls like this that almost read like human language. Only when needed, the reader can dive in deeper. This type of code documents itself; it’s readable code!

To give you an idea: if your function contains more than 10 lines of code, that’s a smell. Look closely and see if functionality can be split into smaller (well-named) functions. You’ll find that you often can. If you can’t, that’s OK too. Sometimes functions have to be a bit longer. At least you tried.

Go ahead and open some of your recent code and do this right now. Don’t forget to come back here though, we’re only getting started.

Booleans should make for good sentences

Let’s continue down this path of writing readable code by looking at booleans. Booleans are often used in conjunction with if statements. Take the example of a debug mode toggle. Consider these options for a debug mode variable:

Now fill in the blanks in this piece of code:

Which option reads best? I would not pick 1, even though it might seem like the obvious choice. Number 4 is not super readable either. However, options 2 and 3 make for a nice, readable code flow. I would pick 3:

Similarly, you can store more complex conditions in one properly named boolean. Take for example a complex business application, in which you need to call a couple of functions and do some checks to determine if the user has access to a specific page. You could create a large if statement, but that will probably be hard to read.

Instead, you can store the conditions in a boolean, and branch on that boolean instead:

In this example, it also helps that we’ve created well-named functions that do one thing, like is_logged_in().

Perhaps there once was a thin use-case for short variable names. I guess people without a proper editor liked to save time typing names. Or maybe they only had 40 or 80 chars of screen width?

These days, however, we have massive screen estate and editors that auto-complete and auto-format almost anything. So don’t be afraid to write long variable names. It will save a lot of guessing and search-around time for future you. And the added bonus? That’s right; readable code.

Say you need to create a list (or array) with the names of all your Fussball club members. What would you choose?

I’d say member_names is an excellent middle ground. It’s super clear that it must be some kind of list with member names. In the right context, that is usually enough.

Perhaps #4 is OK too, but you shouldn’t make your variable names longer than necessary. Only if you have multiple member lists, #4’s length is essential to clearly distinguish between the Fussball club members and the chess club members.

There’s a concept called returning early, and like all of these tips, it’s language agnostic. The fundamental trick is to return from a function as soon as possible. I started using it way back when programming in Java, but I use it in Python, TypeScript, and JavasScript as well.

To illustrate, let’s look at a pattern that you’ll come across often: a need to check a few things at the start of your function before continuing with the actual work:

The alternative I often encounter looks somewhat like this:

This works not just for functions. At the start of a program, you might need to check the command-line arguments or configuration file. You can use the same style and exit early in case of errors. In this case, we load a YAML config file with Python:

If you can, return early. It’s easier to understand, and easier to read.

Use a code formatter

You need a code formatter that automatically formats your code. It’s one of the easiest steps to take when you want to create more readable code. Don’t rely on your own formatting capabilities. Others have given this way more thought than you have, and there are multiple advantages to forcing yourself and all team members to use the same code formatter:

If you’re a Python programmer, take a look at Black and don’t look back. It’s is an opinionated formatter with only a couple of tweakable settings. You’ll like most of it, and perhaps you’ll hate some of what it does. But the beauty is that it does so consistently and you can trust it does so for good reasons.

Some of the biggest Python projects (like Django) use black to format their entire codebase. Don’t waste time and energy formatting code, use a formatter!

Let’s continue down this path of delegating work to our computers. A linter is a tool that analyzes source code to:

These tools are valuable assets to have in your toolbelt since they do so much more than just help you write readable code. Several linting tools exist. I like Sonarlint, which works for multiple programming languages (Java, Python, JavaScript, TypeScript, etc). There’s also a VSCode extension. Python programmers often use pylint or flake8. Make some time and search for a linter you like, that works for your programming language(s) of choice.

There’s a bottom line to all these tips:

You can learn these readable code tips and tricks in about 10 minutes, but there’s a difference between learning something and mastering it. Apply these tips in your daily coding and you’ll soon have internalized them. Bookmark and come back to this article to remind yourself about writing readable code from time to time.

Please share the article with your friends and colleagues if you liked these tips. Happy coding!

Thank you for reading my tutorials. I write these in my free time, and it requires a lot of time and effort. I use ads to keep writing these free articles, I hope you understand! Support me by disabling your adblocker on my website or, alternatively, buy me some coffee. It's much appreciated and allows me to keep working on this site!
6
6
SHARES
Share to...
BufferCopyEmailFacebookFlipboardHacker NewsLineLinkedInMessengerMixPinterestPocketPrintRedditSMSTelegramTumblrTwitterVKWhatsAppXingYummly