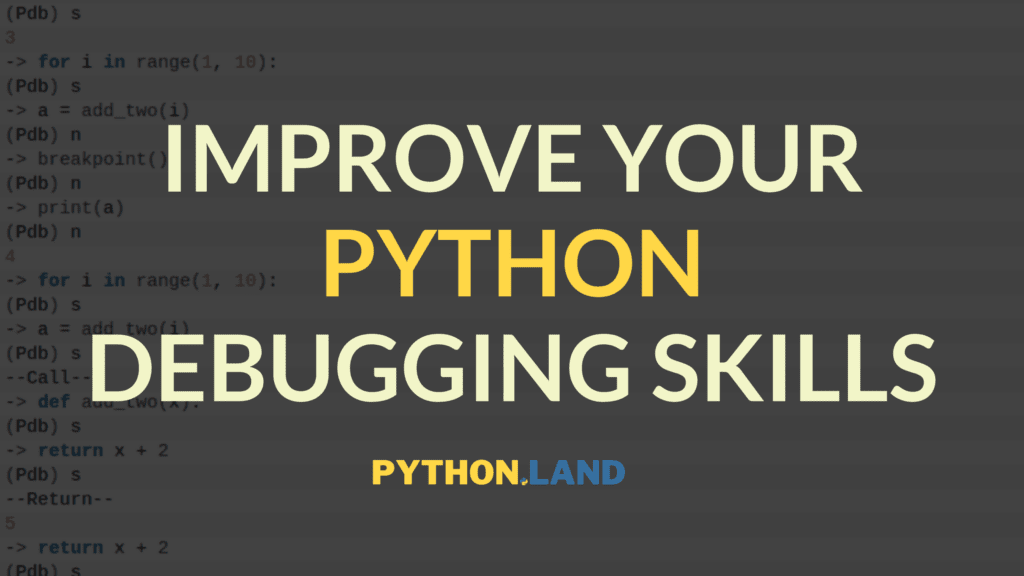 Debugging Python code, for many of us, comes down to adding print statements and trying to reason what’s going on based on the output. It’s not ideal, but for some reason, people just don’t want to touch the Python debugger.

If you’re one of those people that use print for debugging, I’m not judging you. Learning Python is hard. Programming is hard. Life is hard. I understand that learning yet another thing seems tiresome if you’re struggling already. And adding that print statement to your code… it’s just easier. A little confession: I still do it all the time as well. It’s not as bad as some make it seem.

For some reason, people just don’t want to touch the Python debugger

Having said that, I’m going to teach you a little trick that will be just as easy as adding print statements to your code. However, this trick gives you infinite debugging powers and will allow you to conquer the world, should you need to.

You don’t need an IDE to debug your code properly. This trick always works, even in the simplest editor, and even in Jupyter Notebooks.

The trick comes down to this: setting a so-called breakpoint using the instruction breakpoint(). You can insert it in your code, no matter what editor or IDE you’re using, at the point where you would normally put in that pesky print statement.

So what happens when you do so? Let’s find out! Create a simple program, like the one below:

When you run this, and it doesn’t matter if you do so in the REPL, from the command-line, or in your IDE, you are dropped into the Python debugger called PDB. But now what?

When I start the little program above, this is what happens:

There are a couple of things to see here:

The Python debugger is actually a fully functioning Python shell, just like the REPL.

At this point, we can inspect the current environment. Let’s see what the value of a is right now:

Instead of print, you can also use the pdb specific command p, like this:

Running the next line

So what if we want to run the next line of code? There are two options:

To make this more clear: step happily enters a function call and break inside that function. In contrast, next executes the function until it returns, and breaks on the next line.

Now let’s use these two:

As you can see, we first step over the call to add_two with n. The second time, we step into the function with s.

There are more commands that you can try on your own. I won’t list them all, just the most useful ones:

For the complete documentation, head over to the Python debugger page, where all the commands are listed.

Although this can come in super handy, it pays to dive into the debugger that your IDE offers. If you’re a VSCode user, I wrote a tutorial on how to debug Python code in VSCode.

Start Learning Python Today
Having a hard time getting started? Our Python Fundamentals course will get you on track! Get started today! 👊